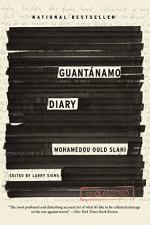 This memoir tells the story of Mohamedou Ould Slahi, a multi-lingual, internationally educated Mauritanian man who was suspected of terrorism and detained by the U.S. government at Guantanamo Bay, Cuba. The memoir, written by Slahi, is edited and formatted by editor Larry Siems. Slahi maintains his innocence throughout the text, and questions the practices of the U.S. government that led to his detention and the treatment he received while detained.

Siems’ “Notes” and Introduction provide a framework with which to approach the memoir itself. Siems details about how the original manuscript by Slahi ultimately reached publication, which was written by Slahi while still detained in Guantanamo. The text was held for years by the U.S. government, before being censored and released to Slahi’s lawyers. In these sections, Siems also describes his own editorial process, provides general historical context about Guantanamo and the U.S. War on Terror, and relates the specific facts of Slahi’s case. This provides a useful framework with which to approach the memoir itself.

The memoir opens with the rendition, or covert international transport, of Slahi from Jordan to Afghanistan, and from Afghanistan to Guantanamo. Slahi describes the chaos and confusion of these transports. He describes poor conditions and mistreatment at Bagram Air Force Base in Afghanistan. He cooperated with interrogators in these locations for a while, but became frustrated with their refusal to name a reason for his detention.

After the initial chapter, the memoir steps backwards in time. Slahi recounts his decision to leave Canada in order to escape surveillance by the Canadian government, where he had come under suspicion when a member of his mosque was involved in the Millennium Plot. En route to Mauritania, Slahi was detained in Senegal before being released to the Mauritanian intelligence service. Once in Mauritania, Slahi was in and out of Mauritanian custody several times, and was interrogated by both American and Mauritanian officials.

Eventually, Mauritanian officials sent Slahi to a prison in Jordan, where he was held for eight months. He was interrogated extensively in Jordan about his involvement with al-Qaeda in Afghanistan during the communist era, his life in Germany, and his activities in Canada. Jordan had a reputation for unlawful detention and abuse of prisoners, but Slahi maintained his innocence and did not experience torture. Throughout, Slahi offers his opinion of the politics at play in his multiple renditions: He blames the power of the U.S. government and the comparative weakness of Mauritania for his exposure to extrajudicial detention.

The memoir jumps forward in time, and a new chapter opens with an interrogation in Guantanamo. At this point, Slahi had been continuously detained for almost two years. Slahi learned that the U.S. government believed he was an al-Qaeda recruiter, and may have had a role in preparing 9/11. Slahi describes interrogations at length, and relates multiple examples of torture, physical coercion, and mental abuse at GTMO. Throughout, Slahi maintained his innocence, until he transferred to an even more isolated part of Guantanamo, Camp Echo. There, Slahi could no longer bear the treatment he received, and confessed involvement to all sorts of crimes and terrorist involvement. After his confession, his treatment gradually improved.

Slahi concludes his memoir with a call to action for the American reader. First, he requests American mobilization regarding Guantanamo specifically. Secondly, he requests that the reader critically assess the standards to which they hold their government, and the willingness we have to jump to conclusions about that which is unfamiliar.