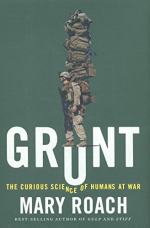 Grunt: The Curious Science of Humans at War Setting & Symbolism

Mary Roach
This Study Guide consists of approximately 39 pages of chapter summaries, quotes, character analysis, themes, and more - everything you need to sharpen your knowledge of Grunt.

The American military and all its branches (Army, Navy, Marines, Air Force, and Coast Guard) are primary objects of the author's analysis - or rather, the circumstance-specific needs of individuals associated with service in one or more of its branches are objects of analysis. Because what service personnel are called upon to do are often uniquely demanding, as are the circumstances in which they are called upon to do it, the American military is uniquely positioned to interact with science in a unique way explored throughout the book.

More summaries and resources for teaching or studying Grunt: The Curious Science of Humans at War.

Grunt: The Curious Science of Humans at War from BookRags. (c)2023 BookRags, Inc. All rights reserved.