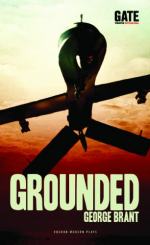 This detailed literature summary also contains Quotes and a Free Quiz on Grounded by George Brant.

This study guide was created from the following version of this play: Grounded, by George Brant. Samuel French, United States and Canada. Acting Edition, © 2014.

The text is a monologue, a long speech spoken by a single character – the unnamed female Pilot. Other characters have impact on the story, but are only referred to by The Pilot: they never actually appear.

A note on style: in the script, there is virtually no punctuation. With a few exceptions, there are no periods ending sentences, no commas between ideas. This is the reason why there is no punctuation of the quotes in the summary, other than a slash ( / ) to indicate where a line ends. An ellipsis ( … ) in the summary indicates a place in the text where an ellipsis marks the end of a particular line of narrative and a shift into the next.

The Pilot, an American woman assigned to combat in the Middle East, begins her story with a description of the joy and fulfillment she feels while flying, referring to the blue of the sky in ways that suggest her identity is strongly connected to getting into, and being in, that environment. In present tense narration, she goes home on leave, meets a man named Eric, has passionate sex with him, and then returns to duty, only to discover she has become pregnant. She tries to keep flying for as long as she can, but as her pregnancy advances, she finds she is no longer physically able to meet the demands of her job. She tells her Commander, is placed on leave, returns home, marries Eric, and has the baby – a girl, Samantha.

Eventually, the Pilot is placed on ground duty, under circumstances that she disparagingly refers to as “The Chair Force” (19). She is assigned to pilot drone aircraft (i.e. planes that fly by remote control) with orders to destroy suspicious-looking vehicles or personnel. As she reluctantly becomes accustomed to this new way of working, she tries to convince herself that she also has an opportunity for a home life: spending time with her husband and daughter before and after work.

The Pilot’s efforts to meet the emotional, physical, and mental demands of both aspects of her life become increasingly difficult. She and the rest of her unit are assigned to monitor the activities of a particular man, first referred to as Number Two (because of his high status within the military cell that America and The Pilot are fighting) and later, as The Pilot becomes more and more obsessed with finding him, as The Prophet. As The Prophet continues to elude her and the others on her team, The Pilot becomes increasingly troubled, finding it more and more difficult to leave her work behind her when she goes home. Both her husband and her daughter make an effort to ease her situation: at one point, her husband takes her to see a counselor, but The Pilot reacts with angry, paranoid, emotional violence and refuses to continue therapy.

Eventually, The Pilot and her team encounter an opportunity to fulfill their mission and destroy Number Two / The Prophet. At a key moment, however, The Pilot sees Number Two embracing his daughter, which would mean that by pulling the trigger on her drone’s weaponry, she would be responsible for killing two people, one of whom is innocent and who resembles her own daughter. Instead of following her orders and pulling the trigger, she guides her drone into the sky and then deliberately crashes it. She is then shocked to see another drone complete her mission, destroying Number Two and his daughter. The Commander tells her that she has been showing signs of stress for months, has been watched closely, and has had a backup secretly placed on her team in case of a situation exactly like the one just encountered.

In an epilogue, The Pilot reveals that she has been taken off duty and is facing a court martial. She speaks directly to the audience, forcefully telling those who have heard her story that they are not innocent of the deaths of Number Two or his daughter, or for that matter any of the deaths triggered by this particular conflict.