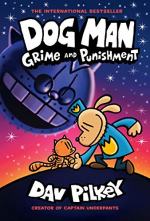 Dav Pilkey
This Study Guide consists of approximately 38 pages of chapter summaries, quotes, character analysis, themes, and more - everything you need to sharpen your knowledge of Grime and Punishment.

This detailed literature summary also contains Quotes and a Free Quiz on Grime and Punishment by Dav Pilkey.

Dog Man, the best crime-fighter on the police force, is back in action in this installment of George and Harold's graphic novel. George and Harold are youngsters who write and illustrate comic books, and this time they are trying to meet the increasing demands of their fans, especially the cops who love their books. They quickly explain the back story – that Dog Man was created when a cop and his dog were hurt, and a nurse suggested sewing the dog's head on the cop's body, creating Dog Man. Dog Man's friend Lil' Petey is the clone of a cat named Petey who was once a villain but is now good. Petey's father is still a villain, known to Lil' Petey as Grampa.

As the novel opens, the Mayor and police Chief are involved in an important event when Dog Man runs in, jumping all over them with his dirty feet. The Mayor is furious when he discovers Dog Man has torn up the rose garden, and he fires Dog Man on the spot. The Chief is heartbroken but has no choice. At home, Dog Man is heartbroken as well. Lil' Petey and his robot, 80-HD, know they have to do something. They invent a hat that makes Dog Man look like a cat. Dog Man goes to the police station where the Chief discovers his identity. The Mayor, however, sees only a cat-headed man and decides to hire him.

Meanwhile, Grampa is in Cat Jail where he has created a hat that amplifies a person's identity. He tries it out on a villainous cat named Big Jim who just wants to snuggle, though he is so big that the hugs are violent. Grampa manages to escape with his hat and becomes a villain, calling himself Crud. Disguised as Cat Man, Dog Man briefly captures Crud but the Mayor intervenes, arresting Dog Man and allowing Crud to escape. Crud uses an animation spray to bring a huge lunch bag to life. The bag, who becomes known as Munchy, drinks nuclear juice then rushes to a nearby pond where it captures a fish holding class. Munchy seems unstoppable as Lil' Petey, Petey, and 80-HD arrive. Petey believes that hate is a powerful emotion and predicts that Lil' Petey will have to use violence to stop Munchy. Lil' Petey has another plan. He is part of a comic club. He calls on his other members. They all draw the things they love the most. Munchy runs away.

Petey admits that love did win in this case, and he makes a decision for himself. He has been harboring hate for his father (Grampa who is Crud as long as he wears the hat). Petey realizes that the hate serves no purpose. He announces that he forgives Grampa. Grampa is so furious that he throws the hat down. Big Jim grabs it, rushing to hug Grampa. The characters discover the Mayor's house is on fire. The Mayor is frantic because his beloved stuffed animal, Mr. Snookums, is inside. Dog Man rushes in after the Mayor, saving both the Mayor and Mr. Snookums in the process. The Mayor is so grateful that he gives Dog Man his badge back. As the novel comes to an end, Petey goes to his mother's grave, taking Lil' Petey for the first time. They discuss that she lives on in both and Lil' Petey has the option to “color his story” any way he chooses.

More summaries and resources for teaching or studying Grime and Punishment.