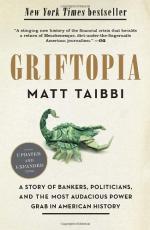 Griftopia: A Story of Bankers, Politicians, and the Most Audacious Power Grab in American History Quotes

"The root cause of all these [financial] disasters was the unraveling of a massive Ponzi scheme centered around the American real estate market, a huge bubble of investment fraud that floated the American economy for the better part of a decade." (Chapter 1, p. 4).

"But in a country where every Joe the Plumber has been hoodwinked into thinking he's one clogged toilet away from being rich himself, we're all invested in rigging the system for the rich." (Chapter 1, p. 31).

"When the real estate bubble came along as a consequence of the money printing that was used to sort of drink ourselves sober after the equity bubble, I knew it was going to be an even bigger disaster." (Chapter 2, p. 71).

"The formula was the same formula we see in every election: Republicans demonize government, sixties-style activism and foreigners. Democrats...

Griftopia: A Story of Bankers, Politicians, and the Most Audacious Power Grab in American History from BookRags. (c)2023 BookRags, Inc. All rights reserved.