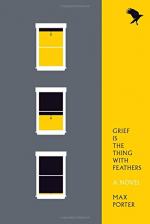 Grief Is the Thing With Feathers - Section 2, pages 66-86 Summary & Analysis

Max Porter
This Study Guide consists of approximately 32 pages of chapter summaries, quotes, character analysis, themes, and more - everything you need to sharpen your knowledge of Grief Is the Thing With Feathers.

The boys detail the ways they pass the time, such as making a ball with the rubber bands around the post and jumping off the back of the sofa. They laugh about possible new mothers from television shows, shocking their babysitter. Dad warns them not to jump off the sofa, but they continue to do so.

Dad has a conversation with Crow. Crow explains about how his wife would appear if she were a ghost. Crow explains that she would return as a child because ghosts “regress” (68). Crow performs words that seem like nonsense until Dad grins because he recognizes some of it from ted Hughes' poetry. He thanks Crow and Crow reminds him that he is his “Ted’s song-legend, Crow of the death-chill” (70).

The boys tell a fairy tale about two boys with faulty memories. The think about the things...

More summaries and resources for teaching or studying Grief Is the Thing With Feathers.

Grief Is the Thing With Feathers from BookRags. (c)2023 BookRags, Inc. All rights reserved.