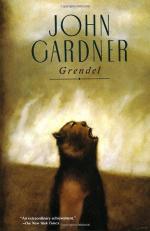 John Gardner
This Study Guide consists of approximately 22 pages of chapter summaries, quotes, character analysis, themes, and more - everything you need to sharpen your knowledge of Grendel.

Grendel is a first-person account of Grendel, the creature Beowulf kills in the sixth-century epic poem Beowulf. Grendel looks like a terrifying beast, but he has highly developed cognitive skills. Throughout the novel, he debates philosophical ideas while trying to figure out exactly what and who he is. While this battle is raging inside him, Grendel is also terrorizing the Danes and their king, Hrothgar. Grendel observes humanity as it develops, and he struggles with whether or not they are a worthy of living. As Grendel grows complacent with his own life, an unknown boy comes along and strikes fear and excitement into him. This turns out to be Beowulf, and he slays Grendel in a fight. Grendel uses his last few moments debating the philosophical implications of death.

Grendel first begins his journey when he finds a hole leading from his mother’s cave to the outside world. He is cautious of the vast land, but he grows more confident as he explores more. One night, he becomes stuck in a rotting tree and is unable to get down. A bull notices him and begins charging. However, Grendel is too high for the bull to reach. After the bull leaves, Grendel sees humans approaching. He has never seen humans before, so he is curious as to what they are. Grendel tries speaking to them, but they grow afraid. They try to attack him, but his mother saves him by scaring the humans away.

Later, Grendel begins exploring the human settlement. He notices that one man, King Hrothgar, is quickly gathering the support of the townships around him. One day, a blind man Grendel calls the Shaper appears. He sings songs about the Danish ancestry, and Grendel becomes inspired by the Shaper’s words of peace and harmony. He finds a corpse in the forest and brings it back to Hart, the mead hall. When he enters, the humans think he is attacking them. They immediately fight him off. He takes this as a sign of hostility and swears war on the humans.

Angry, Grendel begins running and finds a cave with a dragon. The dragon begins sharing his philosophical views with Grendel. He says humans are a paltry, worthless race, who supports their behavior with grand ideals of valor and bravery. Grendel doesn’t exactly understand, so he leaves the dragon in anger. On his way back home, a group of humans tries to attack him. He realizes, though the dragon has put a spell on him, making him impervious to harm. He uses this new power as a shield while attacking Hart. An up-and-coming thane named Unferth tries to kill Grendel, but he is unsuccessful. He begs Grendel to kill him so he can have an honorable death. Grendel does not comply, making Unferth live his life in shame.

Grendel watches as another nation tries to take over Hrothgar’s land. As a peace offering, the other king gives Hrothgar his sister, Wealtheow, to be his wife. Grendel is quite taken by her loveliness. In a way, Wealtheow also serves as a peace offering for Grendel as well. He doesn’t want to attack Hart because of her. He eventually becomes upset and tries to kill her. At the last minute, he decides against it and runs back to his home. Later, the king’s orphaned nephew comes to live with him. Grendel overhears his growing anger with the class division in the kingdom. Grendel uses this to justify killing off humans. He also tricks a priest into thinking he is the great deity.

Over twelve years, Grendel grows weary of killing because he realizes he is doing the same thing each year. He then notices a feeling of dread come over him, and it makes him slightly excited that his life might change. He notices a ship coming across the water, and a group of men get off the boat. He follows them all back to Hart, and the most youthful one claims he will kill Grendel for Hrothgar. Grendel doesn’t believe him, so he later comes and tries to kill the boy. However, the unnamed boy (who is actually Beowulf) defeats Grendel by ripping his arm off. Grendel limps back into the woods and waits to die.

More summaries and resources for teaching or studying Grendel.