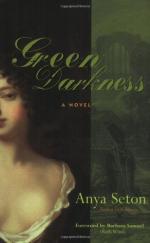 Anya Seton
This Study Guide consists of approximately 65 pages of chapter summaries, quotes, character analysis, themes, and more - everything you need to sharpen your knowledge of Green Darkness.

This detailed literature summary also contains Topics for Discussion and a Free Quiz on Green Darkness by Anya Seton.

Green Darkness, by Anya Seton explores the lives and relationship of Celia Marsdon and Richard Marsdon as well as their 1550's counterparts, Celia de Bohun and Stephen Marsdon. The novel is centered around the concept of reincarnation and the ability to mend past tragedies by reliving them. Seton weaves her tale in 1968 England as well as Tudor England. She uses historical characters to shape the time lines and stories of her protagonists.

The book begins at a house party in 1968, that Celia Marsdon is throwing for her new husband. Celia cannot figure out why Richard has suddenly become cold to her. It all started when the couple visits the ruins around Marsdon Place, their home. During the house party, guests, such as Dr. Akananda (an Indian Doctor) and Lily (Celia's mother) become worried about Celia because she is having episodes of some sort. Celia begins to act differently. She tries to gain Richard's attention, but when he will not return it, she pursues Sir Harry Jones, who is also attending the house party. Richard is outraged by Celia's actions. When they are alone at night in their bedroom. Richard confronts Celia, and she yells at him. Richard grabs Celia and carries her to the school room and rapes her. Mrs. Simpson, one of the guests at the party, walks in on the scene. Richard realizes what he has done when he looks down at Celia. She appears to be dead. He runs from the room.

Lily and Dr. Akananda take Celia to the hospital. None of the other doctors believes she will make it through the illness, and no one can really figure out what is wrong with her. Dr. Akananda feels that Celia must go back in time and relive whatever tragedy occurred in her former life. Dr. Akananda decides to lead Celia through the journey.

It is now 1552. The lovely Celia de Bohun is fourteen years old. She has come to live with her aunt, Lady Ursula, who lives at Cowdray Castle. Ursula is not the owner of Cowdray, even though her family used to own it. Now, Sir Anthony Browne owns the Castle and its lands. He lets Ursula stay there out kindness. It is at Cowdray that Celia meets Stephen Marsdon, a young monk, who lives at St. Ann's Hill and leads all the masses at Cowdray Castle. Stephen begins giving Celia reading and writing lessons, as well as lessons on the Bible.

England is in a state of political disarray because King Edward is sickly. He visits Cowdray Caslte and because of this, many of Sir Anthony's friend come to stay. This is when Celia and Lady Ursula meet Magdalene Dacre and Dr. Julian Ridolfi. Celia and Ursula are invited by Magdalene to go visit her family in Cumberland. Ursula decides this is a good idea because she can separate Celia and Stephen from one another. Although she has no proof, Ursula senses that their is something between the two.

Lady Ursula and Celia go to visit Maggie up North. Celia is saddened because she had gone to Stephen and declared her love for him and he rejected her. When Celia arrives at Naworth Castle, Maggie's home, she is pursued by Maggie's brother, Leonard. At first Celia knows that his attentions may lead to marriage and security, but Leonard is rough with her. Maggie catches Leonard trying to rape Celia and stops him before he can complete the act. Leonard then asks Celia to marry him, and even though Celia refuses, her aunt and Leonard's parents decide the two will marry. Close to Celia's wedding date, however, one of Leonard's family members die and the wedding never takes place.

When Lady Ursula and Celia return home, many things have began to change. Mary is queen, so Sir Anthony has acquired much wealth. His wife has also passed away. Celia is reunited with Stephen, but he is cold towards her. Sir Anthony begins entertaining people to celebrate his good fortune. At one of his fiestas, Celia meets Sir John Hutchinson as well as Sir Thomas Wyatt. Both men are taken with Celia.

Not all people are happy that Mary is Queen. Thomas Wyatt leads a rebellion against the Queen. He and his band of men go throughout England ransacking and pillaging homes. Wyatt comes to Cowdray Castle and takes its inhabitants hostage. He sees Celia and decides that he must have her. Celia leads Wyatt upstairs. While she thinks that she will enjoying being with Wyatt she quickly realizes that she doe snot want to have sex with him. Wyatt becomes aggressive and Celia begins to scream. Stephen storms into the room and rescues Celia. The two begin to kiss and are caught by Lady Ursula. Stephen flees. Ursula is so upset that she sends Celia to marry Sir John Hutchinson.

Celia never consummates her marriage with Sir John. The two are friends, but never become lovers. After four years of marriage, Sir John dies. Celia goes back to Cowdray accompanied by Edwin Radcliffe, one of Sir Anthony's men. Edwin falls in love with Celia and wants to marry her. Celia does not feel strongly about him, but thinks he is a nice gentleman. When she arrives at Cowdray, she learns that Lady Ursula is sick and the Sir John has married Lady Ursula's old friend, Magdalene Dacre. Celia takes care of Lady Ursula until she dies. Celia then begins planning on how she can marry Edwin. Celia asks Sir Anthony for his approval. Once she gains it, the wedding between Celia and Edwin is set.

Celia is ready to go through with the wedding until Stephen comes back to visit. Once Celia sees Stephen, she knows that she must be with him. She goes to see him at St Ann's Hill. Neither one of them can stop their feelings for one another and the two finally consummate their relationship. Stephen cannot believe what he has done. He tells Celia that he must leave and that she must marry Edwin.

Stephen leaves the next day and Celia follows him. She disguises herself as she travels to find Stephen. After three months she makes her way to Igatham Mote where she finds a job as a house servant. Igatham is owned by the Allens. Mrs. Allen is a handsome, yet cruel woman. She is infatuated with Stephen. For a time, Celia does not reveal herself to Stephen. She waits until he is in his garden alone and then reveals herself. Stephen is shocked to see Celia but also happy. She tells him that she pregnant. Stephen cannot believe the news and he does not know what course of action to take.

The next day is Lady Allen's birthday celebration. All the servants are allowed to come. Celia does not show at first, but Lady Allen demands that she come. Celia joins the rest of the servants. Celia is brazen and loud mouthed, performs with exuberant courtesy and offends Lady Allen. The rest of the night, Lady Allen stares at Celia. She notices Celia talk to Stephen and is jealous. Lady Allen then goes to Stephen's hut after the party. She witnesses Celia and Stephen making love. She also overhears the lovers planning to run away together the next day. Lady Allen goes back to the house.

When Celia leaves Stephen, she goes back to the castle. She is caught by Lady Allen and three men. Lady Allen begins to choke Celia. The next day Stephen searches for Celia everywhere, but he cannot find her. He does not understand where she could have gone because they are supposed to leave today. As Stephen passes by the Great Hall, he sees Lady Allen. She is having men re-lay bricks in the hall. One of the men starts to apologize to Stephen. He says that they did not know what they were bringing up from the dungeon. Lady Allen tells the man to be quiet. Suddenly Stephen understands and he throws himself toward the wall to stop the men from laying the bricks. Lady Allen tells him that he cannot touch it because Celia is almost dead. The three men take Stephen out of the room. Later that day, they find he has committed suicide.

When Celia Marsdon wakes up from her illness she does not remember the journey that she and Dr. Akananda have taken. They return to the house and find that Richard has had is own break down. The two lovers act like strangers at first. Dr. Akananda recommends they read the Marsdon Chronicle together. After reading it, the two realize that Celia was Celia de Bohun and Richard was Stephen Marsdon. The two realize that they can now be together because they have relived the events of the past and are now reunited in this lifetime.

More summaries and resources for teaching or studying Green Darkness.