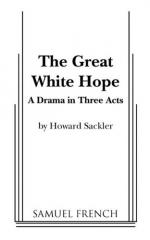 Scene 4 - To the accompaniment of a marching band, a group of black people collects signatures and money for a telegram of good wishes to be sent to Jack. The text of the telegram suggests that they're all fighting with him.

Scene 5 - As the black people exit, a crowd of white men enters, fighting to hear the narration of the fight from another white man standing atop a pillar and looking into the ring. A banner hangs over the scene, showing stylized representations of a black and white fighter in combat. Comments reveal that the fight has gone 10 rounds so far, and Jack still hasn't gone down.

As victims of the heat and excitement are taken away for medical treatment, and as a black boy offering water is angrily chased away by a white man, Pop and Smitty...