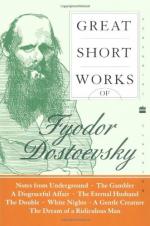 Fyodor Dostoevsky
This Study Guide consists of approximately 51 pages of chapter summaries, quotes, character analysis, themes, and more - everything you need to sharpen your knowledge of Great Short Works.

"In the darkest and humblest corner of Ustinya Fyodorovna's flat lived Semyon Ivanovitch Prohartchin, a well-meaning elderly man, who did not drink" (p. 3). [Mr. Prohartchin]

"Hearing such insults, Mark Invanovitch fired up, but realizing that he had to deal with a sick man, magnanimously overcame his resentment and tried to shame him out of his humor, but was cut short in that too; for Semyon Ivanovitch observed at once that he would not allow people to play with him for all that Mark Ivanovitch wrote poetry" (p. 22). [Mr. Prohartchin]

"Ordynov accepted his inheritance unconcernedly, took leave for ever of his guardian, and went out into the street" (p. 60). [The Landlady]

"He began to feel dejected and miserable, he began to be full of dread for his whole life, for his work, and even for the future" (p. 63). [The Landlady]

"His continual mobility, his turning and twisting, made him...