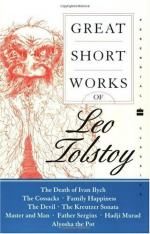 Leo Tolstoy
This Study Guide consists of approximately 36 pages of chapter summaries, quotes, character analysis, themes, and more - everything you need to sharpen your knowledge of Great Short Works of Leo Tolstoy.

This detailed literature summary also contains Topics for Discussion and a Free Quiz on Great Short Works of Leo Tolstoy by Leo Tolstoy.

Marya Alexandrovna is the well-to-do wife of Sergey Mikhaylych who becomes bored in her marriage and then becomes uncomfortable around her husband. She then decides she is unhappy. She is also the narrator of the story, who confesses towards the end that her happiness increases when she learns to accept her husband and marriage.

Sergey Mikhaylych is described by his wife as "middle-aged, tall, robust, and always in good spirits." When his wife becomes depressed, he takes her to Petersburg to cheer her up. This works for a while, but they both soon fall prey to boredom and jealousy.

Katya is an old friend of the Alexandrovna family, and governess to sisters Marya and Sonya.

Dmitri Olenin appears in The Cossacks

Dmitri Olenin is a late-blooming child of the aristocracy who joins the Caucasian Army and sets out for adventures in Chechniya. He hopes to find a wife and to have big adventures with his fellow soldiers.

Lukashka is the young Cossack women to whom Olenin becomes attached and hopes to marry. He is called back to Moscow at his request, having neither had his big military adventures nor having won the hand of Lukashka.

Vanyusha is a tall, handsome Chechen soldier who, unbeknownst to Olenin, is engaged to Lukashka.

Maryanka is an attractive young Cossack woman who works as a maid in her mother's home whenever she takes in paying guests such as Olenin.

Ivan Ilyichappears in The Death of Ivan Ilych

Ivan Ilych is the fastidious attorney and government worker whose hypochondria progresses into a real illness that no doctor can diagnose, and that ultimately causes his death. He hides from an unhappy marriage in his legal work. His is a case of negative thinking literally killing him.

Praskovya Fedorovnaappears in The Death of Ivan Ilych

Praskovya Fedorovna is Ivan Ilych's wife who bears him children and goes with him to various judicial posts throughout Russia as he climbs the ladder of success. She is a chronic malcontent who blames her husband for everything that she thinks is wrong with her life.They become estranged so that by the time he becomes ill, she shows no sympathy or concern for him and he hates her.

Peter Ivanovichappears in The Death of Ivan Ilych

Petere Ivanovich is one of Ivan Ilych's closest friends. At his funeral, he detects a faint whiff of a decomposing body.

Eugene Irtenev appears in The Devil

Eugene Irtinev is the promising young man whose life is undone by a combination of lust and jealousy.

Liza Annenskayaappears in The Devil

Stepanida is the peasant woman that married to an absent army officer and has sex with Eugene Irtenev before his marriage.

Pozdnyshevappears in The Kreutzer Sonata

Pozdnyshev is the narrator who tells the story of how his jealousy caused him to murder his wife.

Trukhachevskiappears in The Kreutzer Sonata

Trukhachevski is the lubricious music teacher whose attentions to Posdnyshev's wife arouse a fierce jealousy.

Vasili Andreevichappears in Master and Man

Vasili Andreevich is a young and wealthyt land owner in rural Russia who enlists his servant Nikita to accompany him on a sled ride during a blizzard to make a bid on a piece of property. His greed causes his death.

Nikita is the peasant laborer who tends to the needs of Vasili Andreevich, even to the extent of accompanying him in a blizzard to make a bid on some property he wants to add to his estate. His peasant common sense enables him to survive being stranded overnight on a highway covered with snow, while his master does not.

Mukhortyappears in Master and Man

Mukhorty is the brave horse who pushes himself to death for his master in a heavy Russian snowstorm.

Prince Kasatsky is an idealistic young military officer in the Russian army, dedicated to his Tsar, who is crushed when he learns that his fiancee has had an affair with the Tsar. He resigns from the military and seeks asylum in a monastery.

Father Sergius is the name Prince Stepan Kasatsky takes upon entering the monastery where he lives for seven years, praying, doing the everyday chores of the monastery, and healing the sick.

Pashenka is an old childhood chum of Father Sergius, who remembers her and seeks her out after he leaves his monastery a broken man.

Hadji Murad is a Chechen warrior and Muslim who fights against Russian colonization. When his warlord kidnaps Murad's family as personal revenge, Murad surrenders to the Russians with the hope he can muster the resources to rescue his family. However, he is captured and beheaded by another enemy, Hadji Agha.

A "large-built, large-eyed, black-browned beauty" and charming seductress who is the wife of Prince Vorontsov, commander of the Kurin Regiment. They live a life of luxury at Vozvizhensk, a fortress outpost in the Caucasus Mountains.

Portoratsky is a "broad, red-faced man" who is a company commander at Vozvizhensk and a righthand man to Prince Vorontsov.

Alyoshaappears in Alyosha the Pot

Alyosha is a younger peasant brother who takes his older brother's place in the family as bread-winner. He is ridiculed and abused by other youngsters in the village because of his poverty and awkwardness, but he remains a good-hearted and kind person.