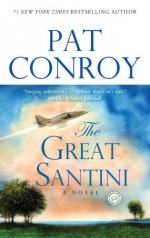 Pat Conroy
This Study Guide consists of approximately 45 pages of chapter summaries, quotes, character analysis, themes, and more - everything you need to sharpen your knowledge of The Great Santini.

This detailed literature summary also contains Quotes and a Free Quiz on The Great Santini by Pat Conroy.

"The Great Santini" is a semi-autobiographical novel by Pat Conroy which details the experiences of the Meecham family, particularly Ben Meecham, and his father Bull Meecham, a Marine Corps fighter pilot in 1962.

When the novel begins, Lieutenant Colonel Wilbur "Bull" Meecham heads home to the United States to collect his family (wife Lillian, sons Ben and Matt, and daughters Mary Anne and Karen) to bring them to Ravenel Air Base near Charleston, South Carolina. He's taking command of Squadron 367 there. Bull is determined to keep his family in shape the way he keeps his air squadron in shape. Bull is really a really tough bully who is nearly impossible to please. He butts heads continuously with Ben, his oldest, who looks forward to his freedom when his senior year of high school concludes. Bull's wife, Lillian, is devoted to him despite his hard drinking, hard language, and hard fists. Somehow, love manages to carry on in the family. While Bull may not know how to show love, he is devoted to his family, coming to his son's defense against local ruffians, and making sure Mary Anne has her own dress to the prom.

Ben hates Bull, but he also knows he loves his father. Bull is unexpectedly killed when his plane's engine catches fire and explodes on a routine night flight. The family decides to move back to Atlanta, Georgia, where Lillian is from and where her mother still lives. As he drives his family to Georgia, Ben realizes that, perhaps, he never hated his father at all, but he only loved him.