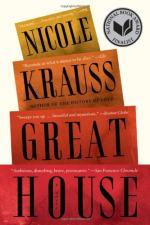 Related Topics
The History of Love
To Be a Man

Nicole Krauss
This Study Guide consists of approximately 61 pages of chapter summaries, quotes, character analysis, themes, and more - everything you need to sharpen your knowledge of Great House.

The lives of two broken characters collide — both literally and figuratively — in the novel “Great House” by Nicole Krauss. The story is told by five different narrators whose lives are loosely connected by an antique desk. Each character struggles with his own brokenness through the course of the novel as each searches to find wholeness for himself. Interpersonal relationships are a major theme in the novel along with the profession of writing, the importance of dreams and the challenge of dealing with loss.

The first narrator, Nadia, tells the story of how she came to own the desk. She tells her story to a judge who lay in a hospital bed. Nadia had just injured him by hitting him with a stolen car. She describes how she traveled to Israel with the intent of getting the desk back from the girl who had taken it from her under false pretenses.

The second narrator, Aaron, is the father of judge who was injured by Nadia. The judge, Dov, had returned to his home in Israel because his mother had just passed away. He’d been staying with his father since his mother’s funeral but the two had not really talked or worked out their relationship as Aaron hoped they would. Dov was hit by the car driven by Nadia while out on one of his nighttime walks. Aaron narrates his sections of the novel as he sits at the kitchen table waiting for Dov to return. He speaks as if he were talking to Dov in person.

The third narrator, Arthur, talks about his wife Lotte. Lotte was a writer who had a strange, unexpected visit from Daniel Varsky one evening. The two struck up a friendship and Lotte gave Daniel the desk she had owned even since Arthur had known her. As Lotte grew old and sick with Alzheimer’s Arthur learned that she had a baby that she had given up for adoption before she knew him. Arthur discusses his struggle to deal with this new information about his wife. After her death he met the woman who had adopted Lotte’s baby but learned the boy had died at the age of 23.

The fourth narrator, Isabel, discusses her relationship with Yoav Weisz. The two had dated while she was studying literature at Oxford. After she had to go home to the United States for a while to care for her sick mother Isabel returned to find the house in which Yoav had lived closed up. Six years later she got a letter from Yoav’s sister, Leah, describing how their father had killed himself. She and her brother had been so riddled with guilt and grief that they had practically become hermits. She wanted Isabel to come and take care of Yoav so that she could leave. Leah felt it was the only way the two could ever have complete lives.

The fifth and final narrator is George Weisz, that father of Yoav and Leah Weisz. His father had owned the antique desk that is central to the novel. The desk was a fixture in the study of the Weisz family home in Budapest before his father was arrested by the Gestapo. After the war was over Weisz had dedicated himself to recreating his father’s study in a room in his home in Israel. The final item he had to locate was the desk. He’d sent his daughter to retrieve it but instead of bringing it back she hid it in a storage unit in New York. Weisz managed to track down the location of the unit and bribe the owner to let him see the desk. Instead of the feeling of completeness for which he’d hoped, Weisz felt disappointment as he sat at the desk he’d hunted for so long.

More summaries and resources for teaching or studying Great House.