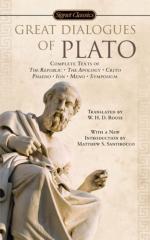 Plato
This Study Guide consists of approximately 44 pages of chapter summaries, quotes, character analysis, themes, and more - everything you need to sharpen your knowledge of Great Dialogues.

Socrates meets Ion, an Ephesian man who is renowned for his ability to interpret and recite the poetry of Homer. He has just returned from a recital contest and placed first out of all the competitors. Socrates expresses his admiration of Ion's skill and notes that only a person who understands Homer's meaning could possibly be a good reciter, which statement Ion immediately agrees. Socrates then begins his investigation into whether Ion's proficiency in reciting Homer is an art by comparing Ion's knowledge to the knowledge of others who certainly possess arts, such as religious prophets or charioteers. Socrates concludes that Ion's ability comes not from an art, but from divine inspiration, much as the poets whom he interprets were inspired.

(read more from the Ion Summary)

More summaries and resources for teaching or studying Great Dialogues.