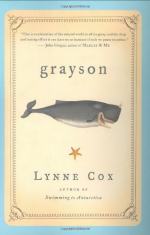 Lynne Cox
This Study Guide consists of approximately 36 pages of chapter summaries, quotes, character analysis, themes, and more - everything you need to sharpen your knowledge of Grayson.

This detailed literature summary also contains Quotes and a Free Quiz on Grayson by Lynne Cox.

“Grayson” by Lynne Cox is a beautiful story about the connection between humans and animals. In the book, Cox tells the true story of her encounter during an early morning workout with a baby whale that had been separated from its mother. With the help of several friends, the baby was successfully reunited with its mother. By exercising her positive attitude and refusal to give up Cox stayed in the water with Grayson keeping him calm until the mother returned.

Long-distance swimmer Lynne Cox was in the middle of a three-hour workout off Seal Beach in California when she got the sense there was something very large in the water with her. Waves created by the creature slammed Cox into the beach twice. Cox would not allow herself to give in to her fear even after she encountered a school of sting rays she was afraid would shoot her with their barbs. When she neared the end of her swim, Cox noticed her friend Steve motioning to her from the pier. He told her that a baby gray whale had been following her during the last part of her swim. If she were to return to shore, the baby whale’s lungs would collapse if he tried to follow her and ran aground.

Hoping to find the whale’s mother, Cox swam back to the jetty where she believed he’d first joined her. While there, the baby whale dove deep below the surface of the ocean. Cox followed him and dove as deep as she could into the water several times, before she was able to locate the whale. During her dives she saw a group of old turtles swimming along as well as a school of bat rays. She realized if she had not searched for Grayson she would not have seen these things.

Cox and Grayson returned to the pier area. Steve told her someone thought they had seen a mother whale around the oil rigs. Although she was afraid of making such a long swim with no partner, Cox went ahead. She didn’t find Grayson’s mother near the oil rigs but did get the chance to see a school of dolphins playing during the swim back to the pier. Soon, a fisherman radioed Steve saying he had spotted a lone mother whale around the entrance to Huntington Harbor. After a short while Grayson’s mother made her way to the pier area and was reunited with him.

While the story in itself is touching, a good deal of the beauty in the book comes from the way Cox describes the different life forms found in the ocean. She uses points of reference and comparisons that even those not familiar with the ocean and its creatures can relate. Themes addressed by Cox in the book also include her dedication to swimming, the benefits of keeping a positive attitude and the different forms of communication that can exist between people and animals.

More summaries and resources for teaching or studying Grayson.