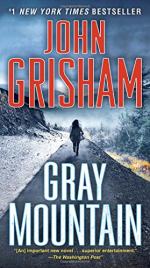 John Grisham
This Study Guide consists of approximately 62 pages of chapter summaries, quotes, character analysis, themes, and more - everything you need to sharpen your knowledge of Gray Mountain.

Gray Mountain by John Grisham begins in the middle of the 2008 recession. Samantha, a lawyer at a high profile firm, has just been furloughed, along with several other employees. The firm can’t afford to pay them, but they don’t want to let them go. Instead, they want the employees to work for a year at a charity service. They’ll retain their work benefits. After a year, the firm might be able to find jobs for them. It’s risky, but Sam has no other choice but to take the offer.

Sam reaches out to each of her parents. Her father used to be a famous lawyer, but he was arrested for committing fraud. This caused Sam’s mother to break up with him, and things had always been tense between them. Sam realizes that she hates her job. She works incredibly long hours and doesn’t have any form of a social life. Her bosses don’t care about her, and many of her clients are bad people.

Sam begins to panic about not having a job. She ends up finding a charity in the mountains of Virginia that could use her. It’s a small legal aid firm run by someone named Mattie. Sam is initially turned off of the idea of practicing law in such a small town. She constantly reminds them that she’s a city girl and she’s only around for the year. Despite that, Sam ends up becoming friends with Mattie and the other lawyer at the firm, Annette. She takes a liking to her clients as well, enjoying that she can work with small town people that actually need and appreciate her help.

Through Mattie, Sam also meets Donovan Gray, Mattie’s nephew. Donovan fills Sam in on the coal mining companies in the mountains. They completely destroy the environment and take advantage of the miners, forcing them to work until they’re sick. Then, they fire them without giving them any benefits. They cut corners and let the local water become contaminated by sludge and runoff. Donovan runs a law firm that challenges the coal mining companies, making him one of their greatest enemies.

Donovan reveals to Sam that with the help of his brother, Jeff, he was able to acquire documents from one of the mining companies which details that they knew their mining was causing sludge to runoff into the water. Donovan intends to sue the company, and he wants Sam to help him. Sam is hesitant because she doesn’t approve of his underhanded methods. Things take a turn for the worse as Donovan dies in a mysterious plane crash.

Jeff is convinced that the crash was the mining companies' preemptively going after Donovan, hoping that any evidence might have died with him. Jeff is determined to take up Donovan’s fight. He joins forces with one of Donovan’s lawyer friends, Jarrett London, who intends to take the case to court, if he can get help from Sam’s parents. Sam is torn, especially once she enters into a relationship with Jeff. When the FBI gets involved, Sam finally has had enough and backs away from the case; but, she still helps Jeff move the evidence so he and Jarrett can pursue the case on their own.

Sam gets an offer to go back to work in New York with a different firm. She’s tempted to take it at first, but she changes her mind when she starts to see the effect that she’s having on the small town. Sam decides that she’s going to stay in Virginia and work alongside Mattie for at least the next two years, wanting to finish up all the cases she’s currently taken on and helping all of the clients whom she has met.

More summaries and resources for teaching or studying Gray Mountain.