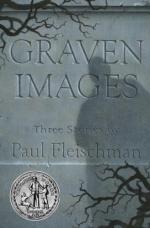 Paul Fleischman
This Study Guide consists of approximately 29 pages of chapter summaries, quotes, character analysis, themes, and more - everything you need to sharpen your knowledge of Graven Images.

The Man of Influence - chapters 1 - 3 Summary

Chapter 1: The reader is introduced to Zorelli, a stone carver. It is a rainy night and Zorelli is unable to sleep. Zorelli looks at his wife, Marta, who is sound asleep. Zorelli has never been able to sleep during the rain.

"Rain, after all, was the enemy of stone, pounding it finally into dust. And Zorelli was a stone carver by trade, a maker of monuments." (The Man of Influence, chap. 1, p. 63)

While Zorelli stands at the door looking at the rain, his cat Angelina rubs up against his legs. Marta wakes up and asks Zorelli if lurking about in the doorway is any way to attract patrons, particularly since Zorelli is unshaven and wearing filthy clothes. Soldiers ride by and a fruit seller passes pushing his part while Zorelli watches...

More summaries and resources for teaching or studying Graven Images.