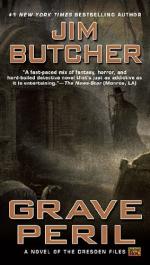 Jim Butcher
This Study Guide consists of approximately 39 pages of chapter summaries, quotes, character analysis, themes, and more - everything you need to sharpen your knowledge of Grave Peril.

This detailed literature summary also contains Topics for Discussion and a Free Quiz on Grave Peril by Jim Butcher.

Grave Peril by Jim Butcher is a story about Harry Dresden, a wizard in Chicago. The city is being tormented by ghosts and a mysterious nightmare. Harry will have to use everything he has in order to stop the evil forces at work and get himself, and those he cares about, out alive.

Harry Dresden is a professional wizard. Harry, with the help of Michael Carpenter, a Knight of God, has been battling ghosts that are suddenly becoming more and more agitated. While battling one of the spirits, Harry realizes that it has had a torture spell put on it. Harry begins to look into the circumstances surrounding the ghosts, even going into the spirit world, but is unable to come up with many answers.

Harry is called to the home of a friend who helped to take down a demon and sorcerer a few months earlier. The man has the same torture spell cast on him and part of his soul has been eater. Harry is able to free the man but realizes that ghosts only go after those that are associated with their death. Harry and Michael are soon the target of this thing they dub the Nightmare. The Nightmare waits until you are asleep and eats part of your. Harry falls asleep and the Nightmare eats part of Harry's magic.

Harry and Michael go to a vampire ball to find who the culprit is but fall quickly into a trap. Harry and Michael are trying to find a way to escape when Harry's girlfriend shows up uninvited. Coming uninvited means that the girl has no protection and is game to be eaten. Harry, Micheal, and Susan are outnumbered and Susan is taken by the vampires. Harry is able to call upon his anger and burns much of the vampire home and the creatures within it although Susan is never found.

Harry learns that Susan, along with others, are being held at the vampire estate in a secrete room. Harry goes there and discovers that the Nightmare is actually the sorcerer he had helped to defeat a few months earlier, and is being controlled by the vampires. Harry goes to sleep intentionally and defeats the creature in his dream world and devours it. After eating the creatures magic Harry is very strong and is able to rescue Susan, who has already begun the transformation into vampire, and destroy the vampire estate. Susan refuses to marry Harry since she can't control her blood lust. Some of the vampires escape and a war is started between the vampires and wizards.