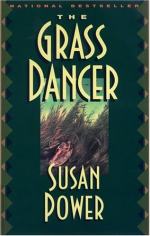 Susan Power
This Study Guide consists of approximately 41 pages of chapter summaries, quotes, character analysis, themes, and more - everything you need to sharpen your knowledge of The Grass Dancer.

This detailed literature summary also contains Topics for Discussion on The Grass Dancer by Susan Power.

At the center of the story is Harley Wind Soldier, a young Sioux living on a reservation in North Dakota. He is a descendent of Ghost Horse, a heyo' ka or sacred clown who lived in the same area during the 1860s. Ghost Horse fell in love with the beautiful woman warrior, Red Dress. Before they could marry, however, Red Dress lost her life. The legend says ever since that day, the spirits of Red Dress and Ghost Horse have tried to be reunited. Charlene Thunder is the descendent of Red Dress and she feels the pull toward Harley. That feeling is not returned, though, and this poses the first mystery of the novel. Is the legend true? From the beginning pages, it is suggested nothing is as it seems. The Grass Dancer is a series of stories combined to make one tale about the connection between generations spanning more than 100 years. By the end of the novel, the reader can see how the actions of those who came before us can affect our daily lives for better or worse and ultimately, each of us must choose our own path.

Harley Wind Soldier has been carrying a feeling of emptiness where his heart should be. His father and brother were killed in a car accident before Harley was born. He believes his mother has never stopped grieving for her loss and her grief has created a gulf between them. Handsome like his father, Harley nevertheless is something of a loner, always searching for something to fill the emptiness. Charlene Thunder would be happy to take that role, but Harley is not interested. Charlene knows she could use the power she supposedly has inherited from Red Dress to force Harley, like Charlene's grandmother, Anna Thunder, has done with countless men over the years. However, Charlene does not want that for Harley. She hopes he will decide on his own.

Frank Pipe is Harley's best friend and the grandson of the tribe's spiritual leader, Herod Small War. Frank Pipe knows he is likely to take over for his grandfather someday and this security allows him to be a grounding force in Harley's life. Herod is steeped in tradition, a holy man who speaks to spirits as a normal matter of course. His opposite among the community is Anna Thunder, a powerful witch who seems to use her magic only for her own benefit. At first, Anna appears as a totally disagreeable character, mean and bitter. She frightens many because of her apparent disregard for the pain she causes. As the novel progresses, though, the events that came together to make her who she is earns her some sympathy. She has lost loved ones, driven others away and suffered terrible betrayal. Her reactions to these events end up affecting many people in her life, including Harley Wind Soldier.

The events in the novel are told in many voices including those of the major characters. Mystery after mystery is suggested and, as the story unfolds, these mysteries are answered - often with surprising results. In the end, each character is where he or she has chosen to be, even when the choice is difficult.

More summaries and resources for teaching or studying The Grass Dancer.