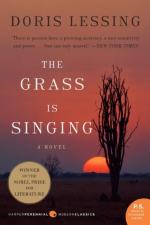 The Grass Is Singing Setting & Symbolism

Doris Lessing
This Study Guide consists of approximately 58 pages of chapter summaries, quotes, character analysis, themes, and more - everything you need to sharpen your knowledge of The Grass Is Singing.

The novel is set in this country, which at the time the action unfolds was populated and governed according to the rules of apartheid, institutionalized racism in which the white minority was socially, legally, and politically dominant over the black majority. See "Style - Setting" for a detailed exploration of this setting's thematic and dramatic importance to the novel's atmosphere, story, thematic development, and meaning.

The house in which Dick and Mary Turner live is little more than a shack: flimsy walls, no proper ceiling (it has instead a roof of heat-magnifying corrugated iron), and little or no interior decoration. In many ways, it's seen by other whites in the community (and by Mary Turner herself) as indicating that the Turners have a much lower standard of living than that lived by other whites in the community. In this house they are poor...

More summaries and resources for teaching or studying The Grass Is Singing.

The Grass Is Singing from Gale. ©2005-2006 Thomson Gale, a part of the Thomson Corporation. All rights reserved.