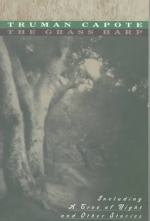 Truman Capote
This Study Guide consists of approximately 40 pages of chapter summaries, quotes, character analysis, themes, and more - everything you need to sharpen your knowledge of The Grass Harp.

This detailed literature summary also contains Related Titles and a Free Quiz on The Grass Harp by Truman Capote.

The Grass Harp is a story told by Collin Fenwick, an orphan whose life spent with eccentric relatives enriches him more than he could ever have imagined. Collin is especially close to his aunt Dolly, a gentle soul whose only act of rebellion occurs one autumn when she removes herself and a few others to live in a tree house in a sprawling tree on the outskirts of a small Southern town. The episode teaches lessons of love and life for those who inhabit the tree house as well as those who try to extricate the rebels from their firm positions.

Collin is only eleven-years-old when he comes to live with the Talbo sisters, Verena and Dolly in a small Southern town. Collin recalls that his parents married at a very young age and were very much in love, his mother reduced to tears each time her husband would have to leave for his traveling salesman job. Collin's mother dies before she reaches the age of thirty and Collin's father is devastated by the loss and launches into a whirlwind of destructive behavior belying his grief. Collin's father's cousin, Verena Talbo, arrives to take Collin to live with her and her sister, Dolly. Soon after Collin arrives at the Talbo residence, Collin's father is killed in an automobile accident leaving Collin an orphan.

Collin grows up in the big Talbo house where he is slightly frightened by the aggressive businesswoman, Verena, but adores Dolly, a gentle, sensitive person. Collin is also very fond of Dolly's friend, Catherine, who lives in a small building at the back of the Talbo property. Catherine had also been orphaned as a girl and lived with the Talbo sisters since their father brought her to the house to live. Verena is envious of the relationship that Collin, Dolly and Catherine share but is too vain to admit her emotional weaknesses and needs.

Dolly and Catherine have a small cottage industry of making a dropsy cure from boiling down selected herbs. Verena, who is an assertive businesswoman, brings home a man from Chicago one day with the secret intent of producing the dropsy potion in mass quantities for sale once they have wrestled the formula away from Dolly. This intrusion into Dolly's affairs launches the normally reticent Dolly into a rebellious move that shocks not only Verena but also the entire town.

Dolly, Collin and Catherine take a few belongings and some provisions and move into the tree house in a China tree on the outskirts of town. During this time, they learn about each other as well as two other townspeople who take up temporary residence with them, Judge Charlie Cool and Riley Henderson. The story that ensues is a series of attempts by Verena and the authorities to extricate the tree house dwellers but Dolly will not be moved until she is sure that the decision is hers alone and not the wishes of anyone else. The lessons learned during these few days in autumn reveal deep emotions of love, betrayal and enduring bonds forged by people brought together in unusual circumstances that somehow seem completely normal.

More summaries and resources for teaching or studying The Grass Harp.