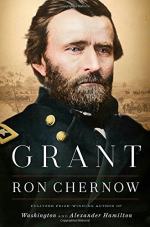 Ulysses S. Grant was the 18th President of the United States and the commander of the Union Army by the end of the Civil War. He was widely considered a military genius and garnered significant public adoration for his wartime success. His record as President is more controversial. Though well-intentioned, his administration was plagued by scandal and corruption. Chernow suggests that the traditional view of Grant is too harsh. He was in fact personally honest, despite the corrupt age he lived in, and was deeply committed to securing civil rights for former slaves and other blacks. As such, the author suggests Grant deserves to be remembered on par with President Lincoln.

Julia Grant was Ulysses’s wife. She descended from a Missouri planter family that owned slaves, thus her views on slavery and sympathy for the South were at times in contradiction with...