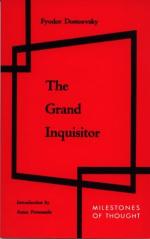 Books Like The Grand Inquisitor by Fyodor Dostoevsky | Suggested Reading

Dostoevsky's The Brothers Karamazov (1879- 80) is the novel from which "The Grand Inquisitor" is taken. A man is murdered, probably by one of his four sons. As the crime is solved, the novel explores the political and intellectual ideas being debated in nineteenth-century Russia. Several fine English translations are available.

The Double (1846) is a short fantasy novel by Dostoevsky. When a poor civil servant is unable to win the hand of his employer's daughter, his double mysteriously appears and succeeds where he has failed.

Dostoevsky, His Life and Work (1967) is a translation by Michael Minihan of Konstantin Mochulsky's critical biography. A solid and insightful critical biography, especially valuable for its coverage of the end of Dostoevsky's life.

"Ward No. 6" (1892) is a short story by Anton Chekhov, perhaps the finest Russian short-story writer. A doctor who operates a mental hospital himself...