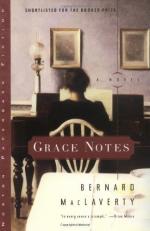 Bernard MacLaverty
This Study Guide consists of approximately 44 pages of chapter summaries, quotes, character analysis, themes, and more - everything you need to sharpen your knowledge of Grace Notes.

How do Huang Xiao Gang's Taoist beliefs influence the overall structure of the novel?

Discuss the use of homophones both symbolically and structurally in the novel.

What is the significance of Dave trying to break Catherine's fingers during his last attack on her?

Catherine is estranged from her parents due in part to a disagreement about religion. How do the aspects of religion and spirituality play out through the novel?

Could Anna be considered a major character in this novel? Why or why not?

A vernicle is a badge that a pilgrim would wear to show where he has been. What is the significance of using the name as the title of Catherine's symphony?

Describe how the use of the Orangemen in the final symphony brings Catherine's...

More summaries and resources for teaching or studying Grace Notes.