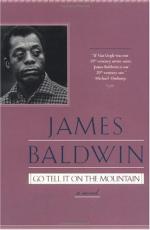 James Baldwin
This Study Guide consists of approximately 79 pages of chapter summaries, quotes, character analysis, themes, and more - everything you need to sharpen your knowledge of Go Tell It on the Mountain.

Nobel Prize-winning author Toni Morrison's 1992 novel Jazz takes place in Harlem in the 1920s and gives a stylized sense of how the community felt and operated.

James Baldwin is even more respected as one of the great essayists of his time than for his fiction. The comprehensive collection The Price of the Ticket: Collected Nonfiction, 1948-1985, offers the best of Baldwin's works in one huge volume.

In December 1971, Baldwin appeared on the television show "Soul" with young rising poet Nikki Giovanni, known then for her militant stand on racial issues. The transcript of their conversation about the state of race relations in America was published as a book in 1973 titled A Dialog. A similarly interesting conversation, also transcribed to book form in 1971, is A Rap On Race, which renders the exchange between Baldwin and white anthropologist Margaret Mead.

More summaries and resources for teaching or studying Go Tell It on the Mountain.

Go Tell It on the Mountain from Gale. ©2005-2006 Thomson Gale, a part of the Thomson Corporation. All rights reserved.