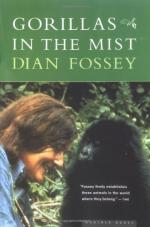 Dian Fossey
This Study Guide consists of approximately 27 pages of chapter summaries, quotes, character analysis, themes, and more - everything you need to sharpen your knowledge of Gorillas in the Mist.

Gorillas in the Mist Summary & Study Guide includes comprehensive information and analysis to help you understand the book. This study guide contains the following sections:

This detailed literature summary also contains Topics for Discussion and a Free Quiz on Gorillas in the Mist by Dian Fossey.

Dian Fossey wants to travel to Africa so desperately that she takes out a personal loan in order to finance a seven-week trip. She carefully plans every step of the itinerary, which is much different from that of a typical tourist. As soon as she arrives at Dr. Leakey's excavation site, she falls, breaks her ankle and unceremoniously vomits on the fossil of a giraffe. She manages to continue her trip and spends a short period of time in the mountains observing gorillas. The trip is much too short to begin any serious study and Fossey returns to Kentucky where she continues working at a job to repay her loan. When Dr. Leakey arrives in the United States and tells Fossey that he believes there is funding available for a long-term study of gorillas, Fossey is eager to go. She sets out with only a limited idea of what she needs but is helped by photographers Alan and Joan Root. Alan travels with her to set up her first camp, but she's there only a short time before political unrest prompts a move. She sets up a new camp that becomes known as Karisoke and begins working to make the gorillas accept her presence.

Over the coming years, Fossey begins interacting with the gorillas, though she tries to limit the impact of her presence. She begins documenting the various members of several groups and comes to know many of the individual members by sight. When her work is well established, Fossey realizes that she is going to have to have help in order to expand her research and to conduct a comprehensive annual consensus. The first American student arrives, panting and with the immediate realization that he won't be able to withstand the rigors of the task ahead. Over the years, she has several others who don't work out but has some who prove invaluable.

Fossey deals with the poachers who create continued threats to the gorillas, though many of the gorillas caught in traps are caught unintentionally. Gorillas typically break lose from the traps but often develop complications and die later. Fossey connects with a number of the members of the various groups over the years, some who tend to look to Fossey and the other human observers as sources of entertainment. Some of them find Fossey's possessions interesting, and Fossey once hands a gorilla a National Geographic magazine in an effort to keep the youngster entertained without touching her camera or camera lenses. She is amazed that the youngster looks at the pictures but seems to hold a grudge for having been pacified with the magazine.

Fossey says that the key to the survival of the species is conservation and that it's up to humans to decide whether the gorillas will be among those species to disappear from the face of the earth.

More summaries and resources for teaching or studying Gorillas in the Mist.

Gorillas in the Mist from BookRags. (c)2022 BookRags, Inc. All rights reserved.