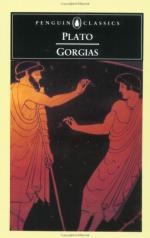 Plato
This Study Guide consists of approximately 32 pages of chapter summaries, quotes, character analysis, themes, and more - everything you need to sharpen your knowledge of Gorgias.

This detailed literature summary also contains Topics for Discussion and a Free Quiz on Gorgias by Plato.

When Socrates endeavors to question Gorgias about rhetoric, their discussion turns into an exposition of arguments between Socrates, Gorgias, and Polus. While defining rhetoric, Socrates provokes discussion as to the nature, influence, and practice of rhetoric. In the debate various moral, philosophical, and spiritual issues are raised.

When Gorgias is unable to define rhetoric and contradicts himself, his disciple Polus defends him. Socrates delves into the difference between the concept and form that for him is more flattery and sham. Just as cookery elicits pleasure, rhetoric evokes gratification. Both involve skill rather than art.

The argument advances as Gorgias and Polus find rhetoric to be a powerful tool that Socrates ridicules due to their inability to show why rhetoric teaches everything although knows nothing. Through a series of paradoxes, Socrates proves that rhetoric has no power at all, while raising issues of justice, morality, and philosophy.

The final part of the argument that deals mostly with the relation of power to justice is driven through the dialogue between Socrates and Callicles. For Callicles, pleasure should be pursued, while power is the consequence of strength and natural order. Those who are strong should govern those who are weak, and the law is part of conventions designed by the weak to defend the weak.

Socrates views power as a tool of self-control and the ability to choose between what is right or wrong rather than as a control others, proving that those who derive evil from power are wretched and must necessarily be unhappy. His definition of happiness involves pursuing virtue and honor.

Socrates is critical of rhetoricians and Sophists, who are little concerned about the effects of their influence as long as it benefits them. When his opponents are at a loss to answer any more questions, he makes the final speech.

In his view, doing wrong is worse than suffering, while justice is beneficial to those who wrong and need to be corrected. Flattery should be avoided and pleasure, just as all other actions, should achieve good. As only justice can assure healthy soul, justice is of utmost importance and needs to be pursued.

More summaries and resources for teaching or studying Gorgias.