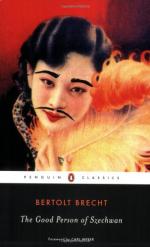 Bertolt Brecht
This Study Guide consists of approximately 21 pages of chapter summaries, quotes, character analysis, themes, and more - everything you need to sharpen your knowledge of The Good Person of Szechuan.

The Good Person of Szechuan Summary & Study Guide includes comprehensive information and analysis to help you understand the book. This study guide contains the following sections:

This detailed literature summary also contains Topics for Discussion on The Good Person of Szechuan by Bertolt Brecht.

A con artist named Wang knows three prominent gods are walking the earth and looking for “good” people to restore their faith in humanity. Because he lives under a bridge, he doesn’t think his home is good enough for the gods. He tries to find a place for the gods to stay for a night, but everyone turns him down except for the prostitute Shen Teh. The next morning, the gods give her 1,000 silver dollars for her hospitality. They continue on their journey, and Shen Teh uses the money to purchase a tobacco store to try to improve her life.

The day before she opens her new tobacco shop, many people come into the store and ask her for favors. They try to take advantage of Shen Teh’s hospitality. However, she feels she cannot say no to any of these people because she knows they are living in abject poverty themselves. But she also knows if she continues to give them everything she owns, she will be out of business. She tells all the people she has a cousin who will come and help her. The next day, a cousin named Shui Ta comes and tells everyone to leave Shen Teh alone. Shui Ta enlists the help of a local policeman to rid the shop of the squatters, and the policeman suggests Shen Teh marry a wealthy man to help her maintain the shop. Shui Ta is skeptical at first, but he realizes the idea would help his cousin tremendously.

Before Shen Ten can get married, she meets a cynical man named Yang Sun and falls in love with him. All the while, Wang has been seeing the gods in dreams and giving them updates on Shen Teh. They are pleased with her actions, but they think Shui Ta’s decisions are cruel. They still continue to search for a “good” person, though it is becoming quite difficult.

When Shen Teh arrives at her shop the next morning, the locals are upset because she was late bringing them food. She had also forgotten to pay the rent, but an elderly couple loaned Shen Teh 200 silver dollars in order to cover her debts. Yang Sun's mother, Mrs. Yang then comes to Shen Teh and begs for 500 silver dollars to help her son secure a job as a pilot. Shen Teh gives the woman the 200 silver dollars and then promises to find some way to raise the rest. In an interlude, it is revealed Shui Ta is actually Shen Teh in disguise; she dresses as a man and pretends to be her stronger, tougher male cousin. No one recognizes that Shui Ta is actually Shen Teh in man's clothes.

Shui Ta is taking care of the tobacco shop when Yang Sun comes to ask for the remaining 300 silver dollars. He wants Shen Teh to sell the shop and live in poverty while he goes away and flies planes. After Yang Sun leaves, the barber Shu Fu comes over and tells Shui Ta he promised Shen Teh the use of some of his buildings to provide shelter for the homeless. Shui Ta says Shen Teh will marry him. Yang Sun then returns to see Shen Teh and sweet-talks her into marrying him and selling the shop. The wedding doesn’t happen, though, because Shen Teh refuses to give Yang Sun the remaining 300 silver dollars. Later, Shen Teh finds out she is pregnant. She realizes the only way to make a decent life for her child is to let Shui Ta take over. Shui Ta then opens up a tobacco factory using the tobacco an older couple gave Shen Teh to take care of.

Months later, the factory is in full swing. The poor people are all working, though they believe Shui Ta is a difficult boss. After his mother asked Shui Ta to hire him, Yang Sun was now working at the factory. He was eventually even promoted to foreman.

When visiting Shui Ta’s office months later, though, Wang tells him Shen Teh was pregnant. Yang Sun gets the police to arrest Shui Ta because he thinks Shui Ta is hiding Shen Teh from him.

At the court, the three gods are the judges. Shui Ta tries to explain to them he was only trying to help the poor people by making them work. At the same time, though, the workers were complaining about the difficulty of the work and how Shui Ta was too hard on them. Shen Teh recognizes the judges as the three gods she invited into her home, and has everyone leave. She reveals her true identity, and the gods are surprised at the turn of events. She tries to explain how difficult it is being kind yet firm with people who only want to steal and take. However, the gods simply leave for heaven and wish her all the best with her life. The play ends with a person standing onstage and apologizing because the play doesn’t have a tidy, happy ending.

More summaries and resources for teaching or studying The Good Person of Szechuan.

The Good Person of Szechuan from BookRags. (c)2022 BookRags, Inc. All rights reserved.