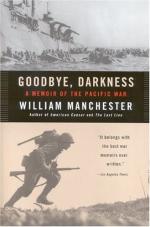 Goodbye, Darkness: A Memoir of the Pacific War Summary & Study Guide includes comprehensive information and analysis to help you understand the book. This study guide contains the following sections:

This detailed literature summary also contains Topics for Discussion on Goodbye, Darkness: A Memoir of the Pacific War by William Manchester.

The personal memoir contains a mix of biographical and autobiographical elements combined with retrospective analysis of events during World War II. Most, but not all, of the material concerns US Marine Corps combat actions. The major military actions considered include the Japanese attack on Pearl Harbor, the American defeat in the Philippines, the successful American attacks on New Guinea, Guadalcanal, Tarawa, Saipan, Guam, and Peleliu; the American victory in the Philippines, and Iwo Jima; and the American invasion of Okinawa. All of these actions are presented as biographical and historical accounts, though they are treated as capsule histories and are in no way intended to be comprehensive historical accounts.

The second major constituent of the book is a series of autobiographical reminiscences about the author's personal involvement in military action and combat. William Manchester, the author, enlisted in the US Marine Corps shortly after the attack on Pearl Harbor. He describes his stateside training, including the typical shenanigans of a young enlistee, and his deployment to the Pacific Theater of war where additional training and idle time were experienced. The author then entered combat on the island of Okinawa and, as a corporal, led a section of men involved in intelligence work—largely running messages, reading maps, and providing security. Many of the author's fellow soldiers are named and very briefly described, but none of them receive much biographical detail; the author mentions that names have been changed to protect privacy.

The book's biographical portions are related in a fairly chronological order, but the author's autobiographical recollections are presented in a non-chronological fashion, interspersed with other segments of the book. This presentation of material has led some readers erroneously to conclude the author personally participated in numerous combat actions across a wide geography. The final major constituent of the book involves a late 1970s series of trips undertaken by the author to visit and revisit Pacific Theater battlefields in an apparently successful attempt to come to terms with prior combat experiences. The book features over two-dozen black and white photographs and over a dozen simple maps. Chapters are named but not enumerated; there is unfortunately no index.

Goodbye, Darkness: A Memoir of the Pacific War from BookRags. (c)2022 BookRags, Inc. All rights reserved.