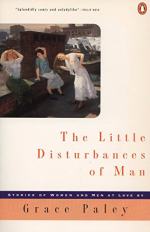 Grace Paley
This Study Guide consists of approximately 18 pages of chapter summaries, quotes, character analysis, themes, and more - everything you need to sharpen your knowledge of Goodbye and Good Luck.

This detailed literature summary also contains Quotes and a Free Quiz on Goodbye and Good Luck by Grace Paley.

The following version of this story was used to create this study guide: Paley, Grace. “Goodbye and Good Luck.” The Little Disturbances of Man. New York: Penguin Books, 1985. Pages 7 – 22.

The story begins with Rose Lieber telling her niece, Lillie, to listen to her story. The story is about Rose Lieber’s youth. She was an overweight woman who got a job as a ticket seller at a theater. However, her life changed when she met Volodya Vlashkin, a moderately famous actor who performed for the theater company.

One day, Rose learned that Vlashkin had a wife and children, so she left him because she did not want to be a homewrecker. After she made peace with her mother, Rose was courted by many people who were brought to her by her relatives. Rose was not interested in any of these suitors. Throughout the years, Rose had various brief encounters with Vlashkin, but they were nothing more than polite conversations.

After many years, the theater company closed, and Vlashkin retired. Vlashkin returned to Rose’s apartment one day and informed her that his wife had left him. After some discussion, they decided to marry. The story ends with Rose telling Lillie that she (Rose) needs to leave soon, otherwise Rose will be late for her wedding to Vlashkin.

More summaries and resources for teaching or studying Goodbye and Good Luck.