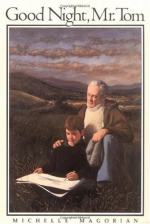 Michelle Magorian
This Study Guide consists of approximately 24 pages of chapter summaries, quotes, character analysis, themes, and more - everything you need to sharpen your knowledge of Good Night, Mr. Tom.

Britain is on the brink of war when young William Beech is sent to live with Tom Oakley in the village of Little Weirwold. Tom Oakley is a sad, reclusive widower who slowly accepts the idea of having the boy live with him. Tom soon discovers William has been a victim of child abuse and greatly needs his love and care.

Tom takes William under his wing and provides him with warm clothes and plenty of food. William begins to thrive and he soon begins school. There he meets caring teachers and develops a close-knit group of friends: George Fletcher, sisters Carrie and Ginnie, and Zach, a fellow evacuee. William is embarrassed because he can’t read but with the help of Tom, he is soon able to keep up with his peers. During this time, William begins to realize he has a talent for drawing and acting.

Although William is happy with his new life, the events of the outside world aren’t as bright. World War II is in full swing and has become a grim reality for the village. When William receives word his mother is ill and he must return to London, his heart sinks.

In London, William finds his mother has given birth. She questions him about his life with Tom and beats him when she feels his responses aren’t sufficient. William’s mother locks him and the baby in a closet and leaves indefinitely. Tom awakens in the night with a premonition that William is in trouble. He goes to London and finds William beaten, sick, and clinging to his dead infant sister. After a brief stay in a London hospital, Tom kidnaps William and returns him to Little Weirwold.

After returning to Little Weirwold, William begins a slow recovery. His time in London has taken a physical and mental toll on him. With the help of Tom and his friends, William begins to feel normal again. Not long after his recuperation, he learns his mother has committed suicide. William is shocked by her death but happy to learn Tom is going to adopt him.

Life continues normally until the August day when William’s best friend Zach is called back to London to visit his wounded father. Weeks go by without any new from Zach. When news finally does come in, it is bleak. Zach is dead.

William is overcome with grief but with the help of his support system, he begins to understand Zach will live forever in him. William realizes he has much to live for and is thankful for his life with Tom.