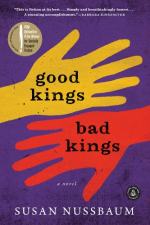 This study guide is based on the hardcover edition of Good Kings, Bad Kings, by Susan Nussbaum. New York: Algonquin Books of Chapel Hill, a division of Workman Publishing, 2013.

Good Kings, Bad Kings, a novel by Susan Nussbaum, shares a collection of narratives told from the viewpoint of each character. The first narrative is told by Yessenia Lopez. Yessenia had been confined to a wheelchair, but that did not stop her from brutally beating a fellow student who mouthed off to her. The fight resulted in her being sent to Illinois Learning and Life Skills Center, known as ILLC, a facility for children with disabilities. While there, Yessenia spends time in the time-out room after she cuts up her roommate's mattress. The narratives that follow Yessenia's continue to tell the personal stories of others at ILLC.

Joanne Madsen recently took a job at ILLC. She had been hit by a bus, and she is now dependent on a wheelchair. Though she is in the school, she feels as though she is not a part of it. She lives by herself and has a lot of money from the bus company settlement. So, while she sympathizes with the other kids, she has more than they will ever have.

Ricky Fernandez is a driver and aide for ILLC. Being a large man, he is often called upon to wrestle a kid into submission and take them to the time-out room if they are acting up. Being a survivor of a rough childhood, he understands why these kids are acting up and goes easy on them. In his internal monologue, he sides with the kids against the other staff. Externally, he does his job, but finds ways to show the kids some kindness. This way, he gets them to calm down on their own instead of escalating the situation. He thinks Joanne is pretty and offers her a ride home one day, so she would not have to wait at the bus stop in the rain. They hit it off, and begin flirting.

Michelle Volkmann is a recruiter for Whitney-Palm, the corporation that runs ILLC. She gets $300 for every bed she fills. She goes to homeless shelters and other spots to find people who would benefit from one of Whitney-Palm's many facilities. They also have facilities for adult care and psychiatric care. She spots Cheri Smith, who is schizophrenic, and has some physical disabilities. She lies, telling her she will have her own room at ILLC, but gets her to live there. Michelle's rationalization is that it is better than a homeless shelter.

Teddy Dobbs had surgery to remove a tumor in his back when he was very young. That made him wheelchair-bound. He is also developmentally disabled. At 21, he will age out of ILLC next year. He wants to run away because he does not want to live in an old age home. He is engaged to Mia, who is two years younger.

Jimmie Kendrick tried to make it as a singer, but wound up homeless. She describes herself as a tall, strong lesbian. She returns home and meets up with an old friend, Joanne, who arranges for her to work at ILLC. Jimmie has a certification as a nursing assistant.

Mia is wheelchair bound and comes from an abused home. The abuse continues at ILLC when a staff member, Jerry, rapes her one night. She is ashamed of what happened to her. Between her shame and the threats from the aide, she never reveals what happened. She breaks it off with Teddy, without explaining why. He does not understand what has happened. He acts out, ramming his wheelchair into the wall. Louie, one of the aides, throws him roughly into the time-out room.

Some of the other characters start to bond as well. Ricky and Joanne start a romantic relationship based on mutual respect. Jimmie and Yessenia forge a kind of big sister-little sister connection. Jimmie looks out for her, and even takes her on an unauthorized trip to a club where she is singing. However, she does not let Yessenia off the hook when the girl is caught trying to steal.

Joanne and Michelle also meet, but their connection is not pleasant. They both work for Whitney-Palm, but have very different opinions about the company. Michelle likes the company and her boss, and wants to work her way up the corporate ladder. Joanne sees the company as warehousing children until they die. Joanne plants some doubt in Michelle that her company might not have the patients' best interests in mind. Joanne points her to some data showing how often the children get sick and die. She makes Michelle want to question why these children never reach any level of independence.

Mia eventually starts suffering from a sexually transmitted disease that Jerry had given her. She has to go to the nurse. When the nurse realizes what happened, she pressures Mia to say who she is having sex with. Mia names Jerry and he is arrested soon after.

Things are still awkward between she and Teddy, though. It takes a while, but he eventually comes around to talking with her. They get back together. Joanne tries to help him at the Center for Disability Justice, where a lawyer is planning for ways to have him transfer to a semi-independent residence instead of another institution.

Cheri, who was recruited by Michelle in the beginning of the book, is transferred to an insane asylum, and many of the kids are upset with this. Michelle sees her at the asylum, where she is doped into a near-vegetative state. She is horrified that someone she recruited off the streets now has this fate.

A fight breaks out in the cafeteria between a staff member and a student. Pierre, a student who is often getting in trouble, is confronted by Louie, an aide. It turns out that Pierre did not do what Louie is accusing him of doing. Louie, an ex-prison guard, is too rough with Pierre, and knocks him down. Pierre responds by stabbing Louie with a pencil in the chest. Louie breaks Pierre's jaw in retalliation. Then Jimmie practically picks Louie up and smashes him into a wall. Louie is put on leave pending an investigation after that. Pierre winds up transferred to the asylum.

Teddy is put in the shower by one of the aides. She leaves him alone for a few minutes to talk on the phone. The water comes out too hot, and he falls out of his chair trying to get out of the shower. He dies in a hospital a few days later.

After the funeral, Yessenia stages a protest against ILLC. She straps herself to a tree out front with a sign that says “This place abuse and kill children.” A few other students join her. Joanne joins, and also makes a few calls to disabled groups in the area. They come out as well, and get the media to come. The protest lasts until nightfall.

In response, ILLC hires two additional aides, a good therapist, and a few other changes are made. It is too little, too late for people like Yessenia, though. She is ready to leave as soon as possible. She even skips school to meet up with a man she met on a dating site.

The end of the book has all of the characters either joining or splitting off. Joanne is fired. Michelle quits. Ricky is looking for a better job. Joanne and Ricky are in a serious relationship. Jimmie wants to be Yessenia's foster mother.