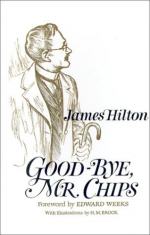 James Hilton
This Study Guide consists of approximately 28 pages of chapter summaries, quotes, character analysis, themes, and more - everything you need to sharpen your knowledge of Good-bye, Mr. Chips.

This detailed literature summary also contains Topics for Discussion and a Free Quiz on Good-bye, Mr. Chips by James Hilton.

"Good-bye, Mr. Chips," by James Hilton, tells the story of Mr. Chipping, nicknamed Mr. Chips, who becomes a teacher at an English all-boys boarding school called Brookfield. Mr. Chips worked for a year at another school but did not feel comfortable there and did not get a very good review from the headmaster. Mr. Chips is one of the language teachers and rather unenthusiastically teaches the dead languages of Ancient Greek and Latin. Privately, he feels that learning these languages is rather meaningless but nonetheless goes through the motions. He is not a very good disciplinarian and in fact is somewhat intimidated by the student body.

Mr. Chips lives at the school and has very little personal pleasure in his life. Chips has never felt comfortable around women—his ideal woman is delicate, weak and timid. When he is 48-years old, he and a school colleague take a summer vacation on a lake in the area. While on a hike up a rocky hill, a young woman is waving in his direction. He thinks she is in peril and starts to rush to her aid. However, he gets his foot stuck between the rocks and the woman winds up coming to his aid. The woman is 25-year-old Katherine Bridges who helps Chips hobble back to his room. She checks in on him during his recovery and soon the two fall in love and marry before the next semester at Brookfield begins.

Katherine is the antipathy of Chips' ideal woman. She is strong, opinionated and politically liberal. Katherine's effervescent personality and spirit awakens the real Mr. Chips who was there all along. She teaches him to think independently, speak his mind, love and share joy and most of all to have fun and laugh and laugh.

Tragically, Katherine dies in childbirth the year after they marry. The child she was attempting to deliver died that same day as well. Chips is in the throes of depression over his loss, but by tapping Katherine's spirit and outlook he is able to carry on. Chips begins to relax and enjoy himself and ultimately discovers he has another true love—that is the one for his students. Chips is inspired by Katherine's spirit, often relegating the curriculum to a lesser importance than exploring the humor of a situation or person.

Mr. Chips becomes the most popular teacher at Brookfield. After he retires, he moves in across the street so he can stay in close contact with the students—making a special effort to meet the newly-arriving students each year. He is asked to come back and help at school because the staff has been depleted by the demands of World War I. When the young headmaster tells Chips that Chips belongs at Brookfield and is needed to hold them all together, he is overcome with emotion. Chips faces further tragedy with the loss of many of his students who are killed in the war.

In his final years, he spends much time reflecting about his life and career. On his deathbed, he hears a comment from one of his gathered colleagues that it was a pity he never had children. He corrects the person. He has had children—thousands and thousands of them. As he shuts his eyes for the final time, he is comforted by thoughts of his beloved students.