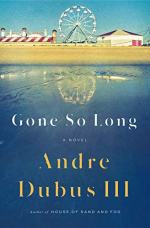 Andre Dubus III
This Study Guide consists of approximately 54 pages of chapter summaries, quotes, character analysis, themes, and more - everything you need to sharpen your knowledge of Gone So Long.

This detailed literature summary also contains Quotes and a Free Quiz on Gone So Long by Andre Dubus III.

The following version of the book was used to create this guide: Dubus III, Andre. Gone So Long. W.W. Norton & Company, 2018.

Gone So Long is the story of three family members who work to reconcile the ills of the past with their present lives and future chances for happiness. After Daniel Ahearn murders his young wife Linda in the presence of their three-year-old daughter Susan, he is sentenced to 15 years in prison. Once he is released, Daniel buys a trailer in the woods and lives a solitary life. It is not until he is diagnosed with prostate cancer that he attempts to reestablish contact with his now 43-year-old daughter.

Through a lengthy letter to Susan, the reader learns about the details of Daniel's young adult life and time served in prison. He tells Susan about how he and Linda first meet at the amusement park. Coveted by every other man, Linda chooses Daniel. The two share a seemingly pure love for the first years of their relationship. Despite her family's objects, after Linda discovers she is pregnant, she and Daniel get married. Though Daniel tells Susan he always loved her and her mother, he becomes consumed by jealousy and rage. In an attempt to keep Linda for himself, he begins controlling every facet of her life. Feeling trapped and claustrophobic, Linda threatens to leave Daniel, taking Susan with her. Unable to let her go, Daniel stabs his wife to death.

Desperate to make amends with his daughter and to see her before he dies, Daniel tells Susan he is a changed man. His former self, Danny, was young, violent, and mentally unstable. He tells her he loves her and is on his way to see her.

After finishing a caning project, Daniel withdraws a significant sum of money from the bank, prints out Susan's picture and work address, as well as instructions on how to write a will, and heads to Florida to see her.

The narrative continues to unfold, alternating between scenes of Daniel driving, and Susan and her grandmother's lives in Florida.

Susan, now 43, continues to work out the complications of her interior emotional life. Afraid she does not love her husband Bobby, Susan takes leave from her job as an English Adjunct, and moves back in with her grandmother Lois. She tells Bobby she is only going to her grandmother's so she can focus on her writing.

The narrative conveys the details of Susan's life during and after college, through portions of her memoir, a piece of writing she works on in the narrative present. After her father murders her mother, Susan lives with her mother's mother Lois. For the first 20 years of her life, Susan believes she is an orphan, that her parents died together in a car accident. After Danny Rollings murders five women on Susan's college campus, Lois tells Susan that her father murdered her mother. The revelation plunges Susan into deep depression. Questioning her entire identity and existence, Susan resorts to meaningless sex with a string of men she does not care about. She becomes obsessed with researching the serial killer Danny Rollings, hoping to understand her father through his story. She aborts two children, fearing the commitment and entrapment the pregnancies suggest.

In the narrative present, Susan struggles to smooth old tensions with her grandmother. Lois' portions of the story, however, prove the deep-seated difficulty of their relationship. Though Lois has devoted her life to raising and protecting her granddaughter, she feels Susan is selfish and ungrateful even as an adult.

When Daniel's letter finally arrives, Bobby visits the women at Lois' home and presents the mail to Susan. So disgusted and distraught by her father's words, Susan cannot even finish the letter. Bobby offers to read it aloud to her. Believing Daniel sounds sincere, Bobby encourages Susan to see her father again.

When Susan tells Lois about the letter, Lois reacts poorly, swearing she will kill Daniel if he shows up. She is so angry and hurt that Susan would want to see the man who murdered her mother, she collapses on the porch and has to be hospitalized.

Resolved to see her father, Susan returns home with Bobby, stealing Lois' gun so she cannot do anything rash. Lois leaves the hospital against her doctor's recommendation, takes a shotgun from her antique shop, and heads to Susan's, still determined to avenge Linda's death.

When she arrives at Susan's, Susan is out. Bobby tries to calm her down. Susan returns and stirs up the tensions again, furious her grandmother would risk her own freedom by killing Daniel. Susan and Bobby take Lois home so she will not be around when Daniel arrives. On the drive back from Lois', Susan throws up and finally tells Bobby she is pregnant. Bobby thinks the pregnancy is good news, though Susan is still unsure she wants to keep it.

Meanwhile, Daniel arrives at Susan's work and kills time in the locker room. Anxious about seeing Susan again, he questions whether or not he should have sent the letter at all. Though he finds Susan's home address, Daniel continues to stall. He buys a new suit and goes to an expensive hotel to get a drink and make a call. He leaves a message on Susan's machine, telling her he is in town.

When Susan and Bobby get home, they receive Daniel's message. Bobby traces the call and they drive to the hotel where Daniel is drinking. Susan waits in the car while Bobby goes inside to see if he is still there. While Bobby is inside, Daniel comes out into the lot, and Susan sees him from the veil of the hotel patio. Though Daniel seems to look right at her, he cannot make out her face, and leaves the lot in a hurry.

Bobby and Susan drive back home, and find Daniel's truck parked in the street near their house. Susan jumps out of the car and yells at Daniel for calling her childhood nickname. She runs into the house and refuses to talk to him. Bobby stays outside and Daniel tells him he is gravely ill, and just wants to say goodbye. He tells Susan and she gives Daniel just 10 minutes to come inside and talk.

Inside, Daniel tells Susan he has always loved her, and tries to give her his money, which she refuses. When Susan asks why he murdered her mother, Daniel says he was not right in the head. Susan demands he leave.

After his departure, Susan and Bobby finally discuss the pregnancy. Bobby asks her not to abort the baby, as he had another relationship where the woman ended the pregnancy without asking him. He wants the chance to love the baby.

Susan decides to keep the baby. She and Bobby build an addition on their home and invite Lois to live with them. Lois sees her great grandchild and new life with her Susan and Bobby, as a chance to regrow the family she formerly lost.

More summaries and resources for teaching or studying Gone So Long.