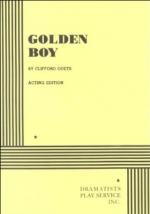 In Golden Boy, Joe gives up his dreams of music to enter the brutal world of boxing. Today, violence in boxing sometimes extends outside the ring, as in the case of former heavyweight champion, Mike Tyson, now an ex-convict. In

Blood Season: Mike Tyson and the World of Boxing (1996), Phil Berger, a former boxing correspondent for the New York Times, uses Tyson's violent story to examine the current state of boxing. Berger's book gives a candid look at the boxers, promoters, and businessmen who help the business thrive today.

Following the recent reforms in the welfare system, millions were forced to get unskilled jobs. In an experiment to see whether or not women could survive on these low wages, journalist Barbara Ehrenreich left her middle-class life and put herself in their place. Her 2001 book,

Nickel and Dimed: On (Not) Getting...