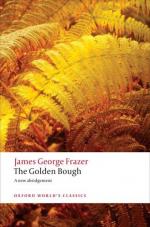 James Frazer
This Study Guide consists of approximately 55 pages of chapter summaries, quotes, character analysis, themes, and more - everything you need to sharpen your knowledge of The Golden Bough.

In the following essay excerpt, MacCormack identifies consistency and coherency in the method and structure of The Golden Bough, a strategy that reveals Frazer's points of interest.

The Golden Bough is a work of many tensions and contradictions, not the least of which is one which the author himself repeatedly pointed to, that is the tension between fact and theory, objectivity and subjectivity. Thus, in the preface to Aftermath, published in 1936, twenty-three years after work on the GB itself was completed, Frazer says:

Now as always, I hold all my theories very lightly and am ever ready to modify or abandon them in the light of new evidence. If my writings should survive the writer, they will do so, I believe, less for the theories which they propound than for the sake of the evidence which they record.

Elsewhere, Frazer describes his work as a repertory which...

More summaries and resources for teaching or studying The Golden Bough.

The Golden Bough from Gale. ©2005-2006 Thomson Gale, a part of the Thomson Corporation. All rights reserved.