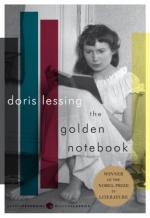 This is the frame story of the novel The Golden Notebook.

This is the name of the best selling novel written by Anna about her experiences in Africa.

The Gainsborough Hotel is a boarding house in which Anna and her friends stayed while in Africa.

Anna's experiences in the British Communist Party are detailed in this notebook.

This notebook contains the beginnings of a manuscript for a novel which closely mirrors Anna's own life.

The Shadow of the Third

Anna writes the beginnings of this novel based on the experience...