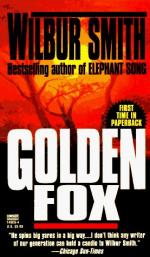 Wilbur Smith
This Study Guide consists of approximately 62 pages of chapter summaries, quotes, character analysis, themes, and more - everything you need to sharpen your knowledge of Golden Fox.

This detailed literature summary also contains Topics for Discussion and a Free Quiz on Golden Fox by Wilbur Smith.

Golden Fox by Wilbur Smith is a remarkable novel that depicts one family divided by political beliefs and the vision they have for their country. The division becomes so great that the family is pitted against each other in a war that can only end with one side or the other eliminated. Isabella Courtney is seduced by a Russian agent known for his ability to set and execute a "honey trap," and once she is tricked into bearing his son, her life is changed forever. Ramon de Santiago y Machado is a KGB agent who believes in the communist system with such certainty that he is willing to sacrifice his own son, and even his own life, for the cause and to further the revolution of his people.

Ramon's commitment is so strong that it overshadows even the love for his own flesh and blood. He sees his son as a tool to use against Isabella, forcing her to turn against her country and against the family she loves. Finally, after years of separation and threats against her son, Isabella is confronted by her family and forced to tell the truth about everything - including her own traitorous behavior. The family comes together in an unparalleled rescue, bringing Isabella and her son home to Capetown with help from brother Sean Courtney and his fellow Ballantyne Scouts. Despite the losses he suffers, Ramon's dedication to his cause is not derailed even after his sudden realization that he loves the son he has now lost.

Instead, Ramon works on turning two brothers against the rest, convincing them that they will save the country they love. They infiltrate a family-owned Chemical company, stealing enough nerve gas to kill thousands. Their target is the yearly Rand Easter Show which includes enough political show to damage the country for years to come. Pilot Michael Courtney and his half brother Ben Afrika rig a small plane to deliver the nerve gas, but the Courtney family is on to them. Sean Courtney, having orchestrated the release of his sister and nephew, is now secreted outside the hanger and in the next few minutes, one brother is dead and the other is in the air with Ramon and the nerve gas. It is a daring attempt that is stopped before the gas gets to its destination, and the Courtney family will be without another young man. Ramon will learn first hand how devastating the nerve gas he carries really is. Exciting, fast paced, and full of twists and turns, the plot is dynamic and the story credible. Wilbur Smith once again weaves a mystery, wrapped in a love story, wrapped in political aspirations for two countries and the men who believe the future requires revolution.