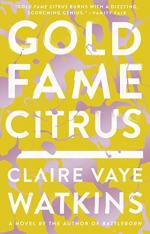 Related Topics
I Love You But I've Chosen Darkness

Claire Vaye Watkins
This Study Guide consists of approximately 42 pages of chapter summaries, quotes, character analysis, themes, and more - everything you need to sharpen your knowledge of Gold Fame Citrus.

Golf Fame Citrus opens in a near-future California, which has been reduced by a severe drought to a barren wasteland. Conservation efforts have failed, and where science has ceased to solve humanity’s troubles, symbol and spirituality offer meaning and explanation. At her birth, Luz Dunn is adopted by the government as Baby Dunn, a mascot for the Bureau of Conservation’s aqueduct efforts, and used as political propaganda in an effort to manage the masses and give people hope. Most of America’s Southwest refugees—known as Mojavs—evacuate Eastward, but 25-year-old orphaned, lonely, and wounded Luz and her army deserter boyfriend Ray Zavier Hollis, hide out in an abandoned starlet’s mansion. They live on ration cola and crackers, and spend their days having sex, sobbing themselves to sleep, writing lists, trying on the starlet’s clothes, reading biographies, and aimlessly surviving.

At an overnight rave, Luz and Ray encounter a strange infant that they nickname Ig. Deeming her cracked-out teenage caretakers unworthy of her charge, they impulsively rescue/kidnap her and bring her home with them. In blissful harmony they learn to take care of the endearing toddler, making do with the supplies they have, living off of love, curiosity, and joy. They name the child Estrella after Luz’s mother who died after drowning herself, but they continue to affectionately call her Ig. Parenting instills them with a new sense of purpose and a stake in the future. They decide to acquire a clean ID for Ray and a birth certificate for Ig so that they can move on and build a better life. An old comrade named Lonnie, known for his ability to procure such forged documentation, informs them it is too late, and their best option is to drive northward, skirting along the Amargosa, the name given to the mammoth-sized sand dune that engulfs town after town in its relentless expansion. They set out for their journey, but after losing their sense of direction, seeing nothing but sand all around them, and running out of gas, Ray leaves Luz and Ig in the car to search for help.

The days go by, with no sign of Ray’s return. Members of a mysterious colony nestled within the Amargosa find Luz and Ig, dying of starvation and dehydration. The colony’s charismatic leader, Levi, informs Luz that Ray was found dead and that she and Ig, on the other hand, belong there with them. A woman named Dallas teaches Luz about parenting and becomes a wet-nurse for Ig, and Levi introduces her to a world of spirituality, meaning, and purpose. Her grief for Ray’s death is replaced by a sense of disillusionment as she comes to realize that he left her there to die due to cowardliness, and an affair with Levi blossoms in its place. Intimate gatherings around the bonfire, the circulation of a homegrown hallucinogenic root, therapeutic group sex with the teenage girls that serve the community in Levi’s sanctuary, and Levi’s scientific discoveries of minerals and wildlife in the desert bring Luz into the fold. She feels a sense of belonging, and like the other members of the colony, comes to believe that the Amargosa sand dune summoned her there for a reason, bringing her to Levi and the others.

Ig is adored by the colony and comes to stand as a symbol of hope for the community. After discovering Luz’s past as Baby Dunn, Levi believes that positioning her and Ig as a new Madonna and Child can bring rejuvenation to the cause, can complete the colony’s providential purpose, and confirm the groups’ status as the chosen people. Luz is hesitant to bring Ig into the public eye as she was—let alone risk the people she kidnapped Ig from coming back for her—and Levi begs her to confide in him.

Just as Luz has fully opened up to Levi, to everyone’s surprise, Ray descends upon the colony from the sand dune. Throughout this time, Ray has been imprisoned by rangers in an underground cell, determined to find a way out. After escaping through a ceiling duct, he walks through the desert desperately seeking Luz and Ig, finally locating the colony he had heard rumors of, finding Luz in the arms of another man. After sobbing his apology to Luz for leaving her, admitting his cowardliness and insisting they are meant to be together, Luz grows distant from Levi and resumes her bond with Ray. He convinces her that Levi is not the prophet she believes him to be, that his scientific discoveries are the manifesto of a madman, and that his plan for Ig is not only nonsensical but also dangerous. After Ig is severely bitten by some sort of creature or insect in the wild and is near death, Luz descends into darkness and feels as though she has failed her child, turning to the root drug, experiencing profound psychedelic visions. But Ray patiently entourages her to resist and she suffers through painful withdrawal symptoms as she gains sobriety.

The last of the mirage of the world she had come to believe in, and the man she thought Levi was, finally peels away, and she and Ray decide to take Ig and leave. Levi riles up the community, declaring Luz and Ray have become a contagion to their harmony, and after a failed attempt on their life by burning the bus they sleep in to the ground, he provides them with an ultimatum: they can leave the colony with their lives—and with a car and supplies to get them to the life they were meant to live together—but they have to leave Ig behind, who they have declared is a child of the dune sea. With broken hearts but also a profound sense of relief in giving up, Luz and Ray leave their adopted child behind. On the road, they are suddenly overcome by a flood, and Luz resigns herself to the water, resisting Ray’s attempt to save her.