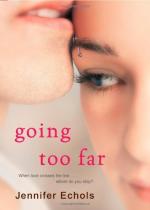 As Officer After handcuffs the guy in the driver's seat, the passenger runs into the woods. As the cuffed driver heads toward the car shouting at Meg, Tiffany hears the conversation, and then Officer After shoves the handcuffed passenger into the backseat of the car, and then the driver. The officer returns to the front seat. As he's filling out the forms, Meg starts questioning him about his wife and kids, but he says he doesn't have a wife and kids. Officer After makes Meg put on her seatbelt and drives to the hospital because he thinks he broke the passenger's arm while he was in pursuit of him. They run into Tiffany and Tiffany tells Meg that John After was in their Spanish class last year, along with some other information about John After. Meg asks him if he is only 18.