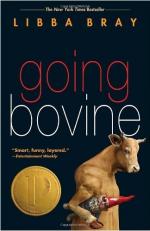 This detailed literature summary also contains Topics for Discussion and a Free Quiz on Going Bovine by Libba Bray.

Cameron Smith is an angry 16-year-old loner. His sister, Jenna, is a popular girl who has what Cameron doesn't seem to want: friends, popularity, and good grades. Cameron's parents, Mr. and Mrs. Smith, have a distant relationship and Cameron can barely tolerate spending time with either of them. Cameron deals with his family issues by smoking pot and listening to Portuguese music by the Great Tremolo, an off-key singer with a ukulele.

After what seems to be a bad drug experience, Cameron begins to hallucinate and his body stops responding to his commands. A trip to the doctor, and the psychiatrist, reveals that Cameron has Greutzfeldt-Jakob disease. In layman's terms, Mad Cow disease. Cameron's body will begin to degenerate and so will his mind, he doesn't have much time left and there is no cure.

Cameron is in the hospital when he makes his first friend, a dwarf named Gonzo. After a visit from a punk rock angel, named Dulcie, Cameron convinces Gonzo to run away from the hospital with him and go on an angel-directed quest. Gonzo, a germaphobe, reluctantly agrees and the two go on a quest to find the mysterious Dr. X. Dr. X has opened a black hole between dimensions and the dark matter he accidentally unleashed is what has caused Cameron's sickness. Dulcie has told Cameron that if he finds the doctor he will be cured.

The two boys embark on a journey to find Dr. X. Along the way they have adventures, meet a yard gnome named Balder, test their strength and create a strong friendship. Their trip takes them across the country from Texas to Florida where they eventually end up at Disney World, the place Dr. X has been hiding. Cameron and Gonzo learn the true meaning of life on their adventure and face their darkest fears. In the end, Cameron must face the toughest realization of his life that his life is over.