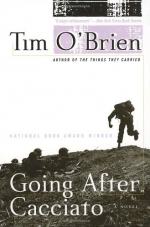 Tim O'Brien
This Study Guide consists of approximately 43 pages of chapter summaries, quotes, character analysis, themes, and more - everything you need to sharpen your knowledge of Going After Cacciato.

This detailed literature summary also contains Topics for Discussion and a Free Quiz on Going After Cacciato by Tim O'Brien.

Paul Berlin is an average American boy from the Midwest, who is been sent to Vietnam in 1968, and on his first day, a man in his platoon dies of fright. Paul Berlin begins to use his imagination to deal with the horrors of war, and a major split from reality begins when another platoon member, Cacciato, deserts and a squad is sent out to capture him.

In reality, Paul Berlin's experience in the war begins on his first day when Billy Boy Watkins steps on a land mind and dies of fright. The platoon experiences a series of increasingly horrific deaths. Frenchie Tucker and Bernie Lynn die in a tunnel, because of Lt. Sidney Martin's choice to enforce regulations. Rudy Chassler steps on a landmine, Buff's head is blown off, Pederson is shot by the helicopter door gunners who place them at the battle, and two other men are sent home because of self-inflicted wounds and a nasty skin infection. Ready Mix, a sergeant, is killed after only twelve days, and Lt. Sidney Martin is eliminated by the squad because he is seen as a threat to their survival. The platoon spends the time between June and August traveling along the River Song Tra Bong looking for the enemy, and on an annihilated mountain top removing the bodies of the dead enemy and searching tunnels for survivors.

By the time the men camp out in the ruined pagoda where Cacciato's desertion is discovered, they are exhausted, jaded and numb from all the death and destruction. Lt. Corson clearly does not want to pursue Cacciato, but leads Third Squad to find the man and bring him back. The squad pursues Cacciato for several days, but when their attempt to apprehend him before he enters Laos fails, the squad turns back.

In the Paris chase timeline, the squad finds a Chinese refugee girl in Laos, and falls into a tunnel, where they meet a Vietcong who has been sentenced to live in the tunnels for ten years on a treason charge. The men are led out of the tunnels by Sarkin Aung Wan, and come out of the tunnels in Mandalay. They continue to chase Cacciato into India, where Lt. Corson falls in love with a lady hotel owner, and they must kidnap him to continue the pursuit.

The train from India goes into Afghanistan, where the men meet a friendly mayor who tells their histories. Afghanistan is very cold, a distinct contrast to the humid jungle of Vietnam.

The squad next stops in Tehran, where they are eventually arrested and condemned to death for desertion. Cacciato helps them escape so they can continue their pursuit of him. Next stop is Athens, and just before the boat docks, Stink Harris jumps off the boat.

From Athens, the men make their way to Germany, to Luxemburg, and finally to Paris. In Paris, the men are exhausted, and begin to behave more like civilians than soldiers. Paul Berlin and Sarkin Aung Wan get an apartment together and Paul Berlin begins to forget about the mission. Oscar reminds everyone, and the chase is back on when someone raises questions about the reason the squad is in Paris.

Paul Berlin finds Cacciato and the squad goes to capture him. At the moment they enter the room, Paul Berlin is yanked back to reality and it is actually the day they try to capture Cacciato in Vietnam. Because Paul Berlin shoots too soon, then falls down and soils himself in fear, Cacciato escapes and it is the end of the story.

More summaries and resources for teaching or studying Going After Cacciato.