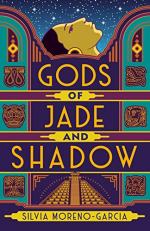 Silvia Moreno-Garcia
This Study Guide consists of approximately 53 pages of chapter summaries, quotes, character analysis, themes, and more - everything you need to sharpen your knowledge of Gods of Jade and Shadow.

Gods of Jade and Shadow Summary & Study Guide includes comprehensive information and analysis to help you understand the book. This study guide contains the following sections:

This detailed literature summary also contains Quotes and a Free Quiz on Gods of Jade and Shadow by Silvia Moreno-Garcia.

The following version of this novel was used to make this study guide: Moreno-Garcia, Silva. Gods of Jade and Shadow. Del Ray, 2019. Hardcover.

18-year-old Casiopea is forced to work for her bitter grandfather Carilio, his family, and her cruel cousin Martín after the death of her father when she was younger. While the rest of the world is flourishing, her island of Uukumil is stuck in the past, plagued by overzealous priests and the oppression of women. However, Casiopea dreams of freedom and wants to return to Mérida where she was born. Her mother promises they will save money so Casiopea can leave, but she believes she is trapped.

The night before Casiopea is meant to accompany her grandfather to a cenote which is rumored to have mystical healing powers, Martίn finds her and demands she shine his shoes. When she refuses, he tells Carilio that she is being disrespectful and she is barred from the trip. Angry, Casiopea opens Carilio’s trunk hoping to find some gold so she can escape. Instead, she finds bones and one embeds itself into her thumb. This summons a god of death, Hun-Kamé, who says his brother, Vuvub-Kamé and Carilio took away four pieces of his body and sealed him away. He says she is bound to him by the bone in her thumb, and will die if he cannot find the pieces of himself to remove it. Casiopea, desperate to escape her life, agrees to take him to Mérida.

Then, the narrator shifts to Martín’s perspective and it is revealed that he is fearful of Casiopea and thinks her courage is unnatural for a woman. He does not care if he gets her in trouble, and wishes that she would obey him. However, the narrator also says that Martín always finds other people to blame for his problems to absolve any guilt he might have.

Hun-Kamé and Casiopea arrive in Mérida where they meet a demon named Loray. He tells them that a weather god named Mamlab has Hun-Kamé’s ear, and thinks they can find him in Veracruz. Hun-Kamé promises to give Loray the power to travel along the Black Road of Xibalba once he regains his throne. After Loray buys Casiopea a large amount of new clothes, he tells her that Hun-Kamé and her are bound until his journey ends. However, if it looks like his brother will win, she can choose to cut her hand off (where the bone lies) and weaken Hun-Kamé by severing his connection to her which will please his brother. She and Hun-Kamé head to Progreso to take a ship to Veracruz.

Meanwhile, his brother Vucub-Kamé - the current ruler of Xibalba after he overthrew his brother - learns of his brother’s escape and visits Cirilo. Because Cirilo is too old to follow Casiopea, Vucub-Kamé enlists Martín’s help and gives him a ring that can summon Vucub-Kamé whenever he needs. He promises rewards for Martín’s success, as well as punishment if he fails and sends him after Hun-Kamé.

Casiopea and Hun-Kamé head to Veracruz and have conversations about the existence of gods. They are born from the life force of the world, given shape by humans, and forced to sleep when people no longer pray to them. He says the Catholic god, if he exists, is not in the area. He tells her she is courageous, as many humans would have pleaded to not go on this trip with him, and Casiopea wishes she had freed him sooner. They retrieve the ear from a weather god, Juan. Hun-Kamé then consults with a ghost who tells him his items are in Mexico City, El Paso, Texas, and Baja, California. Meanwhile, Vucub-Kamé learns that Hun-Kamé is becoming more human and sends Martín to Mexico City to try and reason with Casiopea.

In Mexico City, Hun-Kamé uses Casiopea’s hair to consult with ghosts on where to go next. They send him to a witch named Xtabay and he buys her a necklace as well as a bracelet for Casiopea. She meets Martín outside, but refuses to listen to him and runs away. When they meet Xtabay, Casiopea is forced to break Hun-Kamé out of a seduction spell and they retrieve his index finger. It is later revealed that Xtabay was asked by Vucub-Kamé to slow his brother down, which she did. Vucub-Kamé then sends Martín to a hotel named Tierra Blanca in Baja to learn how to walk the Black Road from a sorcerer named Zavala in preparation for a contest against Casiopea.

Meanwhile, Casiopea and Hun-Kamé begin to fall for each other as he becomes more mortal. In El Paso, Casiopea gives seven drops of blood to a witch named Candida for information on their next target, Uay Chivo. She dreams of bleeding out in Xibalba, but does not tell Hun-Kamé. They go to Uay Chivo’s house, and the sorcerer traps them in a circle of fire. They escape using one of the guards and defeat Uay Chivo in his monstrous goat form, and take back the Jade Necklace. Afterwards, they travel to Baja California, where Casiopea tells about the dreams she has of a life with him. He begins to imagine these as well.

In Baja, they are greeted by Martín and Zavala who take them to the grand hotel, Tierra Blanca. Once there, Martín pleads with Casiopea to accept Vucub-Kamé’s offer to save both herself and her family, as Martín just wants to go home. Zavala tells Casiopea that she and Martín will race on the Black Road to the Jade Palace as champions of their respective god. The winner takes the throne, and the loser is killed. Vucub-Kamé says if Casiopea and Hun-Kamé sacrifice themselves to him, he will allow them to live together in the mortal realm as he can revive Hun-Kamé’s new mortal half. The two discuss it, and Hun-Kamé begs her to accept, as he has fallen in love with her. However, Casiopea believes Vucub-Kamé’s will destroy humanity, and knows she must walk the Black Road and return Hun-Kamé to the throne. He reluctantly agrees, and she is sent into Xibalba with Martín.

Martín travels faster, due to his practice, but becomes frustrated as the road leads him in all directions. Casiopea, meanwhile, uses Hun-Kamé’s advice and forces the road to listen to her instead of following what it asks. However, her progress is halted when she runs into a man-eating bat named Kamazotz. Casiopea gives a snake her bracelet for a distraction and escapes from the bat. When she and Martín meet up again, Vucub-Kamé demands that he kill her. Unable to, Martín tells her to stay back and rushes into the Black City. As he is about to reach the Jade Palace, Casiopea finds the lake from her dreams and realizes that she must sacrifice herself to save Xilbalba and Hun-Kamé. She slits her throat and her body arrives at the World Tree first, awakening the Great Caiman within the lake who witnesses her success.

Hun-Kamé, Vucub-Kamé, Martín, and Zavala are all brought to the lake at the base of the World Tree. The Great Caiman brings Casiopea’s body to Hun-Kamé who revives her. He decides not to kill Vucub-Kamé, as he wishes to end the cycle of hatred between them. He gives Casiopea the ability to speak all languages and communicate with the dead, but regrets that he cannot return to the mortal world and will forget his love for her. However, as she kisses him, the narrator says that a part of his mortal heart remained, and brought happier dreams (in the shape of beautiful flowers) into Xibalba.

In Middleworld, Casiopea mourns her loss. Martín asks for forgiveness, and Casiopea says it will take time for her to give it. The two go their separate ways. Loray arrives in a stolen car with black pearls from Hun-Kamé. The two decide to explore the world together, and Casiopea is excited to finally have her freedom.

More summaries and resources for teaching or studying Gods of Jade and Shadow.

Gods of Jade and Shadow from BookRags. (c)2022 BookRags, Inc. All rights reserved.