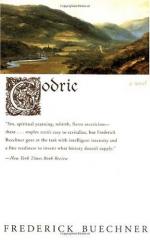 Frederick Buechner
This Study Guide consists of approximately 37 pages of chapter summaries, quotes, character analysis, themes, and more - everything you need to sharpen your knowledge of Godric.

Godric is a man of peasant stock who dishonestly amasses a significant fortune and uses it to lead of life of pleasure and sin. God gradually sends him supernatural signs, usually through the intercession of a saint, to guide him on the right path. Godric eventually decides to become a hermit by the River Wear and lives to be over one hundred years old.

Godric is born to a peasant family in Walpole, England. He has two younger siblings, Burcwen and William. Burcwen and William are very close as they are growing up, but she begins to draw closer to Godric after she saves his life. Godric found a fresh porpoise carcass in the ocean and went to retrieve it—it could easily feed the family for days—but on his way back he succumbed to the strong waves. His sister found him unconscious and resuscitated him. After that point, Burcwen pulled away from William and developed a strong, if excessive, attachment to Godric. When Godric decides to leave Walpole to set out on his own, she tries to stop him—she even threatens to commit suicide—but she is unsuccessful, though he longs to be with her, too.

Godric becomes a merchant. The first ware he sells is women's hair which he buys from convents. He stumbles fortuitously into fortune one day during a riot. He is at a merchant's fair in Bishop's Lynn when local Jews break into a church trying to find one of their own who converted to Christianity. The Christians inside respond with violence. The riot loses its purpose and turns on a slight, effeminate man named Peregrine Small, whom they mistake for a Jew. It so happens that Peregrine dies in Godric's arms, spilling his blood on his clothing. After the riot, the facts become distorted; Peregrine was, they say, a martyr, valiantly defending the church against the Jews' attempts to desecrate it. Godric makes a small fortune selling the "relics" of Peregrine, and even counterfeits more with cat blood. The bishop eventually exiles him, however. He travels to the island Farne to stash away his money when he receives a miraculous vision of St. Cuthbert. He feels genuine sorrow for his sins and confesses to the saint, who absolves him and urges him to live a holy life from then on. Godric is moved, but does not yet change. Instead, he goes into business sailing with Roger Mouse. His life is the opposite of the one recommended him by Cuthbert; he drinks, fornicates, cheats, and even robs.

Godric starts to truly convert on a pilgrimage to Rome with his mother. Rome itself is unimpressive and he feels as if God does not hear his prayers. On the journey back, however, he receives mystical visits from a woman named Gillian, who rebukes his sinfulness and urges him on a path of holiness. Upon returning home, he works briefly for a local baron, but cannot stand the corruption and exploitation. He and Roger finally resume their enterprise, but Godric is no longer a willing party to their dishonest ways. His opposition culminates in a fist fight on the shore of Jerusalem and he winds up being tossed overboard. While in Jerusalem, the site of Christ's execution, he decides to wholly dedicate himself to God. He returns to Farne, collects his treasure, and gives it away. He lives for two years with an eccentric hermit named Elric and decides that he will, one day, be a hermit too.

After working for a church and receiving a basic education, Godric uses his friendship with the bishop to procure a plot of land to live on. He lives solitary for some time but before long his family comes to join him. Aedwen, his mother, is quite old at this point, and does not live much longer. The unspoken desire that exists between Godric and Burcwen finally boils over and the two have sex. While Burcwen is sleeping with Godric, William, their brother, comes by to find his sister; Godric lies and says he does not know where she is. William slips on some rocks and dies looking for her. Ever after, a rift opens between Godric and Burcwen and they only rarely see one another. She finally decides to become a nun. The last years of Godric's life—which were many—were spent quietly in his hermitage. Eventually, a local monastery sent Reginald to record Godric's life. Godric agrees only reluctantly and has a fit when he discovers that Reginald has written that he is a saint. The revelation affects him so strongly that he dies that night.

More summaries and resources for teaching or studying Godric.

Godric from Gale. ©2005-2006 Thomson Gale, a part of the Thomson Corporation. All rights reserved.