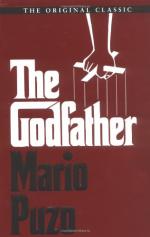 Introduction & Overview of The Godfather

Mario Puzo
This Study Guide consists of approximately 60 pages of chapter summaries, quotes, character analysis, themes, and more - everything you need to sharpen your knowledge of The Godfather.

The Godfather Summary & Study Guide includes comprehensive information and analysis to help you understand the book. This study guide contains the following sections:

This detailed literature summary also contains Bibliography on The Godfather by Mario Puzo.

As soon as it was published in 1969, Mario Puzo's novel The Godfather began setting sales records, becoming the fastest selling book up to its time. Its enormous popularity increased in 1972 when Fran-cis Ford Coppola's movie version was released. The movie won several Academy Awards, including one for Coppola and Puzo's script adaptation of his novel. It is one of the highest-grossing movies of all time and is frequently cited by critics as one of the greatest American movies ever made. It has spawned two highly respected sequels, both co-scripted by Puzo. The novel has consistently stayed in print and has sold over 21 million copies worldwide.

The story revolves around Vito Corleone, a leader of organized crime in the 1940s. He is a man who rules with quiet persuasion, asking those who wish favors from him for their loyalty and dealing mercilessly with those who cross him. When other criminals try to involve his organization in the drug trade, Corleone resists and the shield of power that he has built around his family is threatened. The aged crime lord must defend his family and pass control of his empire to one of his three sons.

This book helped define how the world views organized crime in America, framing the aspects of greed and violence that are inherent in the underworld with an emphasis on family, respect, and honor. The character of Vito Corleone, the Godfather, has been compared to Huckleberry Finn and Holden Caulfield as an archetype, a personality so true to the American experience that, though fictional, he seems familiar to everyone. Far beyond being just another crime novel, The Godfather relates to all stories of immigrant families who are trying, over the course of generations, to fit into the mainstream of American life.

More summaries and resources for teaching or studying The Godfather.

The Godfather from Gale. ©2005-2006 Thomson Gale, a part of the Thomson Corporation. All rights reserved.