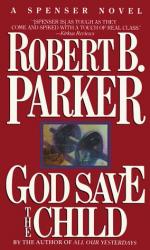 God Save the Child Setting & Symbolism

Robert B. Parker
This Study Guide consists of approximately 36 pages of chapter summaries, quotes, character analysis, themes, and more - everything you need to sharpen your knowledge of God Save the Child.

Where Spenser goes to begin his search of the missing boy.

The subdivision in Smithfield where the Bartletts live.

Where Spenser's apartment is located in Boston.

Where Kevin was a student until going into high school, and where he and Vic put the hearse with the coffin after the ransom demand.

Located on Berkley Street, this is where Spenser goes in search of any police record of Vic Harroway but finds no previous arrests on file.

The Labrador retriever owned by the Bartletts. The dog lies on the porch when Spenser arrives the first time and doesn't get up, and later turns down a "Nutter Butter" cookie, which Spenser says makes him a smarter-than-average dog.

The photography studio where Spenser goes as he is searching for Vic Harroway.

More summaries and resources for teaching or studying God Save the Child.

God Save the Child from BookRags. (c)2022 BookRags, Inc. All rights reserved.