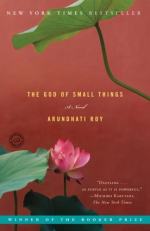 Arundhati Roy
This Study Guide consists of approximately 65 pages of chapter summaries, quotes, character analysis, themes, and more - everything you need to sharpen your knowledge of The God of Small Things.

The God of Small Things Summary & Study Guide includes comprehensive information and analysis to help you understand the book. This study guide contains the following sections:

This detailed literature summary also contains Quotes and a Free Quiz on The God of Small Things by Arundhati Roy.

The God of Small Things, the first novel of Indian writer Arundhati Roy, won the Booker Prize in 1997. The story is told from the point of view of Rahel and the now silent Estha, her brother. Rahel and Estha are fraternal twins. The action pivots mainly on two time periods, 1969 and 1993, moving back and forth from 1993 (the present) to the time of the twins’ greatest trauma, which occurred upon the childhood visit of their cousin Sophie Mol.

Having been separated for twenty-three years with no contact, the Rahel and Estha are now adults. Their mother is no longer alive. Rahel had traveled to America, where she experienced a failed marriage. Estha's life has mostly stood still. He has gone mute willfully.

The twins have met now at their family home in Ayemenem, where the trauma that separated them occurred. During the course of the novel, Rahel unravels her memories of what happened to them and their family, while the perspective periodically moves into other family members’ lives so as to open up an understanding of the family dissolution.

The story revolves around the way different family members’ choices and attempts to escape their culture or class impacts them in tragedy and consequences. Abuse and betrayals are passed down from generation to generation, leading to the full destruction of any family connections or love. Each generation suffers from marital discord, abuse, and rejection by the family members from which they most need love. And through the course of this alienation, an innocent child and an innocent man are killed. As a result, the twins Rahel and Estha are torn apart for many years. They struggle to heal their pain, finding solace only with each other.

More summaries and resources for teaching or studying The God of Small Things.

The God of Small Things from BookRags. (c)2022 BookRags, Inc. All rights reserved.