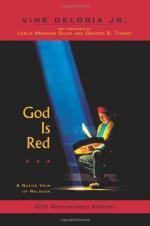 God Is Red: A Native View of Religion Summary & Study Guide includes comprehensive information and analysis to help you understand the book. This study guide contains the following sections:

This detailed literature summary also contains Topics for Discussion and a Free Quiz on God Is Red: A Native View of Religion by Vine Deloria, Jr..

"God is Red: A Native View of Religion" by Vine Deloria is a non-fiction work detailing the origin, history and doctrine involved in the Indian tribal culture. These beliefs are also compared and contrasted against the beliefs of other cultures, especially those of Western Europeans and Americans. Deloria is a man who is well versed in the Native American culture as he is also Indian.

One of the first things that the reader may notice is that Deloria uses the term "Indian" as opposed to the politically correct equivalent of "Native American." This may be due to the fact that the book was originally written in 1972 and the author did not feel that it was necessary to update the reference in the revised edition. Also, Deloria points out that some people are offended by the term "Native American" since anyone born in the U.S. is technically a Native American. Regardless, Deloria does not focus on the moniker and instead focuses on how the Indian tribal cultures differ from that of other cultures.

It is obvious that the author finds many of the traditions and beliefs in the Christian doctrine to be groundless and often absurd. The majority of the book seems to be focused toward pointing out the superiority of the Indian tribal religions. That is not to say that Deloria believes that the entire concept of the Christian doctrine is pointless and that the Indian way is the only way. Rather, there are many passages in which the author applauds the stalwart faith of the non-violent Christian.

One of the most compelling subjects tackled in the book is the concept of Creation and the Deity. The two cultures have almost nothing in common when it comes to beliefs in this area.

Another compelling subject is the topic of death and religion. This is one area in which Deloria claims that the Christian faith makes little or no sense. In the Christian faith, death is seen as an end to life. The main focus of the afterlife is on Heaven and the fact that the soul will go on to its eternal reward if one has obeyed God's law. In Heaven, the streets are paved with gold, there are angels with harps, and everyone is healed. If the afterlife is so blissful, why is it that the members in the Christian faith are the ones who are most afraid of dying? Deloria delights in using the example of televangelist Oral Roberts. Many years ago, Roberts had announced to his congregation that unless he raised $10 million, God told him that he would be "called home." Many people were frantic to raise the money to save their revered reverend. If Roberts had believed what he had preached, the thought of going to his eternal reward should have been welcomed. Deloria jokes that he should have told the same congregation that God spoke to him and changed His mind, ordering the people to send the money to Deloria instead.

In the Indian tribal religion, death is nothing to fear. Nothing ever dies, merely transitions into the next phase. Therefore, death is simply a natural progression.

Overall, "God is Red: A Native View of Religion" is a fascinating look at the Indian tribal religions, including the origin and contemporary use and revival of time honored traditions.

God Is Red: A Native View of Religion from BookRags. (c)2022 BookRags, Inc. All rights reserved.