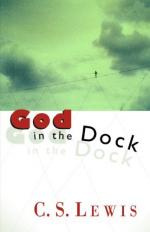 God in the Dock; Essays on Theology and Ethics Characters

Clive Staples Lewis was a famous Christian apologist, lay theologian, novelist, children's book writer, academic, literary critic and essay writer who lives from 1898 to 1963. He is known most well for his famous children's book series The Chronicles of Narnia, some of which have recently become movies and are full of Christian allegories.

Lewis was baptized a Christian but left the church when he was a young man. During his early twenties, he fought for the British in World War I. Due to the influence of his friends, including J. R. R. Tolkien, Lewis converted to Christianity in 1928, at age 30. He returned to the Church of England and became famous due to his radio broadcasts about Christianity during World War II. He wrote a wide variety of fiction books thereafter, including the The Chronicles of Narnia, the Space Trilogy, and the Screwtape Letters.