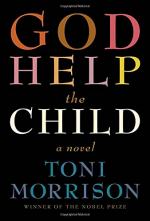 Toni Morrison
This Study Guide consists of approximately 79 pages of chapter summaries, quotes, character analysis, themes, and more - everything you need to sharpen your knowledge of God Help the Child.

This detailed literature summary also contains Quotes and a Free Quiz on God Help the Child by Toni Morrison.

"God Help the Child" by Toni Morrison revolves around the life of Bride, formerly known as Lula Ann Bridewell. She’s a young black woman in her early twenties who has had to overcome many obstacles in her life, particularly moving on from her childhood, to become the successful business woman she is today. She works for the cosmetic company Sylvia, Inc. which sells a “flat-out hip with six cool colors cosmetic line” (10).One of those cool cosmetic lines has actually been developed and is now owned by Bride herself. She calls it, “YOU, GIRL: Cosmetics for Your Personal Millennium” (10). The story follows Bride’s current life situation while flashing back to past events in the lives of her and the other characters. Everyone has problems and many have childhood memories better forgotten, but Bride is hindered as an adult by events from her past.

The book begins with Bride’s mother, Sweetness, telling the story of Lula Ann’s birth. Sweetness and her husband, Louis, are both what Sweetness calls “high yellow” or light-skinned blacks with good hair. That’s why both parents are shocked when Lula Ann is born “Midnight black.” Because of her dark color, Louis assumes that she isn’t his baby, never touches her, and eventually leaves Sweetness, after three years of marriage, to raise Lula Ann on her own. Sweetness is embarrassed to be seen with such a dark child. She treats her harshly from the beginning and doesn’t even want to touch the baby, a feeling she has throughout Lula Ann’s whole life. Sweetness claims to believe that she is only doing this to help the child, to toughen her up, so she will not fall prey to bullies and discrimination. Since she is ashamed for people to think that Lula Ann is her child, she tells the baby to call her “Sweetness” instead of “Mama” or “Mother.” Sweetness sees Lula Ann’s color as “a cross she will always carry” and professes over and over that Lula Ann’s plight in life is not her fault.

After high school, Lula Ann Bridewell drops her “countrified” name, first becoming Ann Bride, then finally, to sound mysterious and interesting in her career, settling on Bride, no last name. At this point in her life, she is living with her boyfriend, Booker Starbern, a man whose background, job, and overall life is a mystery to her. None of that matters to her as long as he continues to treat her like the center of his universe at all times. After what Bride feels is a minor argument, Booker leaves her and doesn’t look back or even return for his belongings.

Although Bride is devastated about her loss, she is mostly focused on visiting a prisoner, Sofia Huxley, who is being released from the Decagon Women’s Correctional Center where she served fifteen years of a twenty-five-year-to-life sentence for child molestation. Bride is one of the children who helped put Sofia behind bars by testifying at her trial. Despite the fact that Bride helped put Sofia away, she has been planning for a year to do a good deed for the ex-con upon her release. She arrives at the prison as Sofia is released. She is carrying gifts to help Sofia get started in her new life; she has $5,000 in cash, a $3,000 Continental Airlines gift certificate, and a promotional box of YOU, GIRL cosmetics all placed neatly into a brand-new Louis Vuitton shopping bag. Neither Bride nor her gift are well received by Mrs. Huxley. She turns into a wild ball of rage and beats Bride to the point that she needs plastic surgery to have any semblance of her normal, stunning appearance.

After the beating, not wanting to call the police, Bride calls her best friend and co-worker, Brooklyn, for help. When Brooklyn arrives, Bride tells her that the attack was from a would-be rapist. Of course, the reader knows she’s lying. Brooklyn helps her and takes care of her through the recovery process, but also uses this time of Bride’s absence from work as a stepping stone in her own career.

While recovering, Bride becomes obsessed with Booker’s exit from her life. At this point, the reader sees that Bride has grown from an awkward, emotionally needy little gal into a beautiful but self-centered, materialistic, and emotionally needy woman. Her new focus in life is to find Booker and discover why he left to give him a piece of her mind.

She goes through a series of emotional and physical problems while searching for Booker. As she goes through these dramas, she flashes back, occasionally, to her childhood. She talks about how her mother, Sweetness, was emotionally and physically distant from her. She knows that Sweetness is ashamed of her. The only happy memory from her childhood is connected to the tragedy of testifying against Sofia Huxley. When she testifies, Sofia is convicted. Everyone seems to be so proud of Lula Ann at that moment. Even Sweetness first smiles at her, then actually holds her hand as they walk out of the courthouse. She is not proud that she confronted the molester; she is bursting with joy that the act of testifying made Sweetness proud and softened her to little Lula Ann.

By tracking a pawn shop ticket in Booker’s name, Bride discovers not only his pawned horn and ring, but his forwarding address as well. She immediately sheds her work responsibilities and heads to the unmarked, backroads town of Whiskey, CA, with only the name "Q. Olive" as a reference guide. Along those dark, rustic roads, Bride’s shiny Jaguar crashes into a tree trapping her inside with a fractured ankle. She’s discovered at dawn by a little girl named Rain, who has mesmerizing emerald green eyes. Bride is rescued by the couple, Steve and Evelyn, who have taken the child in when she is on the streets alone. Likewise, they take Bride into their old-fashioned home. She has to stay there to heal for six weeks, during which time she becomes Rain’s confidant as she tells Bride about the physical and sexual abuse she endured before Steve and Evelyn. Rain’s mom sold her as a prostitute and kicked her out after she had injured a man trying to molest her.

With a healed leg and a more realistic outlook on life, Bride continues her journey and finds Q. Olive, who happens to be Booker’s aunt. While feeding the super thin young woman, Q., or Queen as she prefers, tells Bride about Booker’s past. She confides that when Booker was a child, Booker’s brother was taken by a child molester, killed, and left to rot in a culvert. Booker’s never recovered, and his entire being has revolved around his brother’s sad and untimely death. Like Bride, he also carries scars from his past that have shaped him into a confused, emotional adult.

Queen points Bride in Booker’s direction. They have a very rocky reunion. Queen shows up to referee. Not long after Queen returns to her own home, a bonfire she had in her yard earlier sparks and sets her home aflame. Booker and Bride rescue her from the burning house. They take shifts at the hospital seeing to her care personally. Unfortunately, in spite of all of their effort, she still passes away. In a moment of despair, Bride confesses to Booker that her fixation on Sofia Huxley was not because the woman had molested her, but because Bride, so many years ago, had falsely testified against a woman whom she actually did not witness abusing children. This helps Booker to understand Bride’s former preoccupation with a jailed child molester.

As they spread Queen’s ashes from the riverbank, Bride makes another confession to Booker that she is pregnant with his child. He is happy, and they decide to take another chance on their relationship. The novel ends with Sweetness, who is now in a nursing home, telling the people there about her daughter being pregnant with a grandchild. Although she’s happy, she also knows she will probably never see this child.

More summaries and resources for teaching or studying God Help the Child.